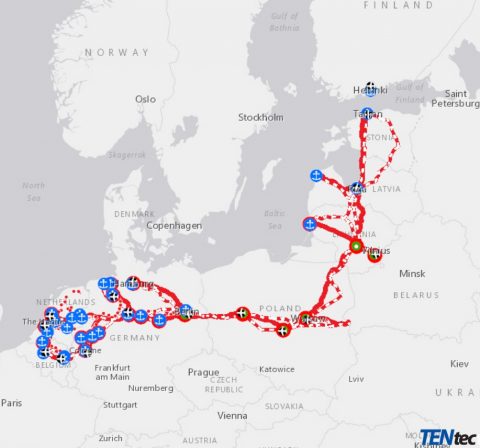 On the North Sea-Baltic Corridor, huge investments are foreseen in railway as a transport mode over the next ten years. An amount of 44 billion Euros has been reserved so far, this is the highest share compared to the financial impetus for road and maritime transport. Izabela Kaczmarzyk is project coordinator for Poland under the EU study about the current status and future compliance and potential of the corridor. In this interview, she gives a sneak preview of this future.

The North Sea-Baltic (NSB) Corridor is the northernmost corridor of the European TEN-T network. It includes Finland, Estonia, Latvia, Lithuania, Poland, Germany, the Netherlands and Belgium, and it connects the Baltic Sea Region with the low countries of the North Sea Region. Considering the importance of this corridor for Poland, Kaczmarzyk will speak about the huge potential of the network at this year’s RailFreight Summit Poland.

The corridor and Poland

One of the principal objectives of the TEN-T policy is connecting east with west, improving the accessibility of the Eastern EU Member States and connecting the western and the eastern markets. Poland is placed in the middle of the corridor, the consultant explains. “As such, the country plays an important role, both as transit country between east and west as well as a relevant country of origin or destination.”

In Poland, the corridor interconnects with the Baltic-Adriatic Corridor, which links the Polish maritime ports with south of Europe. Such interconnections only increase the significance of a particular country, Kaczmarzyk argues. “In Poland, the two corridors connect at Warsaw, Łódź and Poznań.”

The next ten years on the corridor are shaped by the technical requirements defined in the TEN-T Regulation. This is a set of standards that must be met on the corridor by 2030, with the exception of the 1520mm networks in the Baltic States. More concrete, this Rregulation requires 83 per cent compliance in the fields of ERTMS, electrification, track gauge and train length, and 96 per cent in terms of line speed. Required axle load is already almost reached for the entire corridor.

Especially in terms of line speed a lot remains to be done, Kaczmarzyk points out. “There is a line speed compliance of minimum 100km/h for freight in the Netherlands and Germany, but in Belgium there are some sections that are not compliant. In Poland, the line speed compliance along the corridor is on a low level, caused mostly by very low maximum speed on certain sections (especially Warsaw southern rail bypass and Rail Baltica close to the border with Lithuania). Large-scale projects are in progress or foreseen by 2023 to upgrade the performance of the network.”

In general, the TEN-T regulation for the NSB corridor translates into 657 projects amounting to about 110 billion Euros. This is divided by projects identified by Member States and stakeholders (590 projects with the total value nearly 110 billion euros) and additional projects identified by the corridor consultants, in order to achieve full compliance with TEN-T KPIs (key performance indicators). The latter make up for 67 additional projects amounting to an estimated nearly 500 million euros.

The foreseen investment in rail is the largest, Kaczmarzyk notes. This amount is over 44 billion euros, as rail can be seen as the most effective way to address the climate change issues, along with inland waterway investments. The second largest category is road (nearly 39.5 billion euros) followed by maritime (11.6 billion euros).” That is not to say that all these investments have been secured. “There is a gap of required financing without any information on the sources in the amount of 15.5 billion euros”, the consultant points out.

Although it is not within the scope of this article to name all projects, Kaczmarzyk is asked to name a few. “There is substantial number of rail and rail ERTMS projects currently ongoing on the corridor, including modernisation of the national railway sections in Poland”, she says. Examples are the sections Warsaw-Łowicz, Sochaczew-Swarzędz and Siedlce-Terespol, Warsaw Rembertów – Sadowne, Czyżew – Białystok, Białystok – Ełk.

“Other ongoing initiatives relate to national railway section is in Estonia (section between Tapa and Tartu) as well as preparation and implementation of Rail Baltica corridor through Estonia, Latvia and Lithuania. There are furthermore specific investments in infrastructure at railway junctions and nodes along the corridor, such as Klaipeda, Vilnius, Helsinki or Riga. There are also investments in rolling stock as well as deployment of telematics applications in all of the corridor countries.” In the coming few years, some projects with a higher budget are planned to commence. “Such are the development of an interconnecting freight terminal in the port of Tallinn, purchase of rolling stock, or capacity improvement at the railway station in Amsterdam”, the consultant names a few.

Although compliance with the TEN-T Regulation is a main objective, it is not the only one, the corridor consultant points out. “Better coordination and implementation of complex cross-border projects will contribute to faster and better achievement of economic, environmental and other corridor objectives.”

Moreover, new TEN-T is currently formed, taking into account the projected corridor extension. “Work on the corridor extension is also relevant in the context of opportunities such as the Arctic dimension and further development of EU-Asia connectivity.”

Port as a frontrunner

Kaczmarzyk also stresses the importance of cooperation with regions, cities and ports. And, cross-sectoral collaboration is needed to enable the transition to zero-emission transport, she argues.

“Ports as important transport and logistics hubs are frontrunners of economic developments. Issues to be addressed in port cities, such as reducing noise and pollution, rely on good cooperation among all actors, both at the local level and between the ports of the different sea basins. As ports are an integral part of many cities, social and economic issues are intertwined and relate to better integration with other related industries in the value chain, including intermodal terminals, intelligent freight as a concept, different ways of organising logistics chains, rail as an answer to port challenges and demands. Efficient port hinterland connections, in particular by rail and inland waterways, remain a major priority on the NSB Corridor.”

Do you want to hear more about the future opportunities on the North Sea-Baltic Corridor? Izabela Kaczmarzyk is closely involved with the Corridor Work Plan. At the RailFreight Summit Poland, she will discuss what remains to be implemented until 2030. She will also talk about the funding and financing statistics and opportunities, as well as the European Coordinator recommendations and corridor future outlook.

The RailFreight Summit Poland will be held in Poznan on 1, 2 and 3 September. Registration for this event is open and can be done here. You can have a look at the programme here.

44 billion and mostly for freight!! 44 billion !!! And what can we even acheived in the UK? Not even the doubling of less than ten miles of track between Ely and Soham!!!!