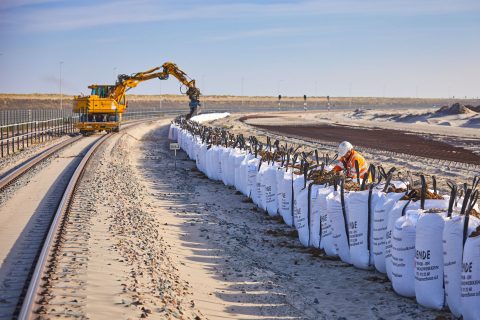 Dutch rail freight operators have faced hindrance of sand blown on the Harbour Line in Rotterdam for several months. Preparing for strong winds this weekend, infrastructure manager ProRail and the port of Rotterdam are stepping up to prevent line closures.

It concerns the railway tracks of the Maasvlakte II, which is part of the port of Rotterdam. Strong winds have been chasing sand from wasteland on the tracks for months. Freight carriers therefore often had to cancel train journeys for days on end. A permanent solution is hard to find, because the problem occurs on kilometres of track, ProRail explains.

For this weekend, it has tried an innovative approach: fighting sand with sand. “In recent weeks we have placed sand in enormous ‘big bags’ over a distance of seven hundred meters along the track”, the infrastructure manager says. “It concerns 750 big bags. To prevent the sand from blowing out of the bags, we applied a layer of clay at the top, in which we grow rye.

The Port of Rotterdam Authority has not been idle in the meantime. In recent weeks, it has treated the so-called ‘K2 site’, covering it with soil and sowing vegetation. This is an area of ​​no less than 78 hectares. Now, a ‘sand trap’ will be made in this area, ProRail explained.

“This is a kind of wide ditch without water in which the sand is collected as much as possible. It will be situated between the K2 site and the Container Exchange Route (CER). We should be ready in early July.

“In addition, by mid-July, the Port Authority will also cover other areas along the track in the same way. This is due to the current breeding season of the birds in the area. After taking these measures, we will examine whether additional measures are needed to keep the sand away from the track. 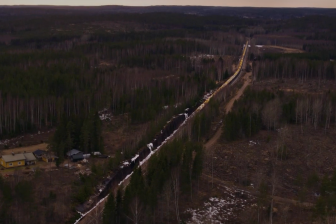