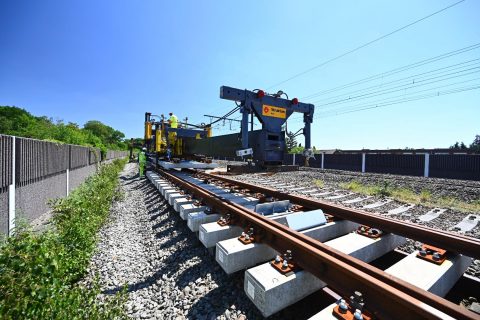 Infrabel replaces ‘heart valves’ of artery to Port of Antwerp

This extended weekend, Infrabel replaces three switches at the northern gateway of the Port of Antwerp. The existing ones are being replaced by modern concrete ones that are more sturdy and maintenance-friendly, the Belgian infrastructure manager said. The works start on Saturday 30 May (after the last train) and continue over the Whitsun weekend. On Tuesday 2 June, the first train will run over the renewed tracks.

Freight trains are partly diverted via the Kennedy tunnel, while trains that transport RID goods are diverted via Mechelen, Ghent-Dampoort and enter the port via the Waaslandhaven.

All in all, Infrabel is investing almost 1 million euros to ensure that the freight trains run smoothly to and from the port of Antwerp. The existing switches are dismantled with rail cranes. To save valuable time, the new copies are already placed next to the track. A “tracklayer”, one of the largest track machines in Belgium, lifts the new switches in one move and immediately places them in the right spot.

Eighty per cent of all rail freight traffic that enters and leaves the port of Antwerp runs via the network of Antwerp-North. Two major railway lines (L27A and L12) converge here. One of those crucial junctions is the so-called “Triangle Street” railway branch in Ekeren. All freight trains between the port and the Netherlands run via this branch. At this point there were three switches that dated from the 1970s and had to be replaced for safety reasons.

Rail in the Port of Antwerp currently accounts for the transport of approximately 7 per cent of all sea containers. The Port of Antwerp has the ambition to increase this to 15 per cent within 10 years. The growth of the port, but also and especially the pressure on the road network and the ambitious climate goals play a major role here. A modal shift is necessary.

Infrabel concluded a cooperation agreement with the Port of Antwerp at the end of last year. Antwerp is located at a central junction of 3 European freight rail corridors. There are about 1,000 km of railway lines in the port. Last year, 24 million tonnes of cargo was transported by rail, good for 130 freight trains a day.