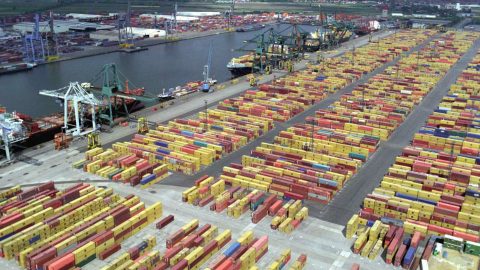 When it comes to rail freight traffic from and to Antwerp, operators proved to have preference for the Brabantroute, which runs via the Netherlands. This stems from the fact that rail freight traffic via the Montzen/Aachen border point between Belgium and Germany decreased by 2.4 per cent last year. This was one of the conclusions of the Rhine-Alpine Annual Report.

As part of this report, all border crossings on the corridor are analysed. While traffic via the border crossing between Belgium and Germany saw a small decline, an increase in traffic of 4.9 per cent was recorded on Dutch-German border crossings.

This increase is due to several factors, the report reads. “Part of the traffic that was initiated in 2018 because of the low water level of the Rhine continued to be transported by rail. There was an increase in traffic to the port of Rotterdam, especially of containers and coal. Also, railway undertakings requested a number of trains from Belgium to Germany and vice versa via the Netherlands instead of via Montzen/ Aachen.”

The Rhine-Alpine Corridor management responded in a query that the number of trains crossing at a single border point is subject to fluctuation. “What could be reasons for that? Firstly, rail freight is a volatile business. Differences in train numbers are often closely linked to changes in general macroeconomic conditions. Furthermore, all available rail freight routes along the corridor are part of a holistic network.” With this last remark it hints towards infrastructure works on the corridor, implicating temporary capacity restrictions.

However, there are also specific characteristics of the border crossing at Aachen that could play a role, it explains. These are “well-known”. “Pushing locos is necessary, as heavy trains have to pass a relatively steep section between Aachen and Gemmenicher Tunnel. Eliminating this topographic constraint would imply disproportionate investments compared to the potential benefits. Unfortunately, dissolving the need for front-change in Aachen West for all trains in direction Köln is only possible through large-scale infrastructure investments.”

This project, also referred to as Rheydter Kurve, is not pursued in German Federal transport planning, because of a weak cost-benefit ratio, the corridor management explains. “However, giving the full picture we witness an unprecedented ramp-up in infrastructure investment along the German rail network. DB Netze is pushing forward various large-scale projects on the Corridor Rhine-Alpine, in order to provide for more capacity, more quality and ultimately more competitive rail freight.”

Also at the Aachen/Montzen border point, the German effort is praised. “Montzen/Aachen West is an important route for cross-border rail freight along the Rhine-Alpine Corridor.. Therefore, DB Netze provides for high-quality distribution at this border hub by deployment of so-called “grenzknoten-disponenten”. These experts optimise operations in shift work and make sure that traffic runs as smooth as possible.”

In the annual report, the corridor management reported a decrease in traffic of 0.15 per cent on the entire corridor. “The overall economic situation in Europe and the worldwide decline in the automotive industry are in all likelihood the main reason for this minor decrease.”

The Rhine Alpine Corridor runs from Rotterdam in the Netherlands to Italy. It is the most crowded corridor in Europe, crossing the most important economic centres.