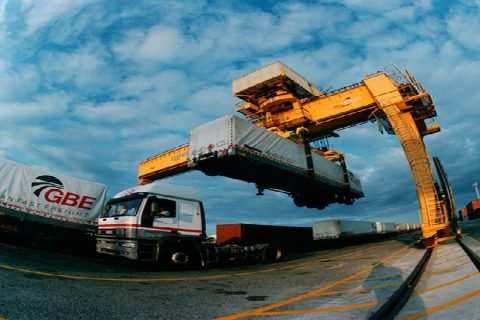 Transport policy in the UK is not moving fast enough to keep up with decarbonisation planning in the EU, says the Rail Freight Group. There are fears that inaction could put rail freight and the British industry at a significant commercial disadvantage.

The Rail Freight Group, the industry representative body in the UK, is urging the London government to include a target for increasing rail freight use in its forthcoming Transport Decarbonisation Plan. It says failure to do so risks the proven role for rail freight in greening the economy. RFG says the potential for rail freight is not being maximised and the UK is falling behind the EU in making the green agenda.

Back in December, the European Green Deal, signed-off by the European Union, reset the Commission’s commitment to tackling climate and environmental-related challenges, claiming it to be this generation’s defining task. “As a matter of priority”, says the EU communique, “a substantial part of the 75 per cent of inland freight carried today by road should shift onto rail and inland waterways.”

Although Britain will not be bound by EU law, having voted to leave the Union, an increasingly stringent policy on the continent will make it more difficult for UK freight – including rail – to operate beyond the Channel Tunnel. The RFG says that policy in this country should at very least match European regulations. If that were achieved, say some commentators, then post-Brexit Britain would actually have a competitive economic edge.

Be a world leader at COP26

“As a minimum, the government should match the EU’s commitment to shift freight to more sustainable modes, and go further by setting a target to drive change”, says Joe O’Donnell, head of policy at the Rail Freight Group.

They want to match the EU’s commitment to encourage modal shift and include a target for increasing rail freight within the ‘movement of goods’ strategic priority. “This will place the UK in a truly world-leading position at the UN’s annual climate change conference COP26.” That event, the Conference of the Parties, originally scheduled to take place in Glasgow in November has been postponed due to the coronavirus crisis, and will be rescheduled in 2021.

There has been an encouraging response from the UK government. The Rail Freight Group says it welcomes some positive comments about rail freight, but is urging it to go further. In particular, the group wants to make sure that rail freight is represented on the new Net Zero Transport Council – an advisory body, set up by the government, and chaired by the transport secretary Grant Shapps.

The new council could consider what actions other government departments can take to aid transport decarbonisation, which is on the RFG agenda. They say that, for example, planning policy could better support decarbonised transport by favouring the development of large distribution hubs in sites with rail access. They also want to consider how waste-derived fuels can play a role in decarbonising rail freight prior to electrification.

Rail freight not featuring in plans

O’Donnell says government needs to take a lead. “The transport decarbonisation plan should maximise rail freight’s role in reducing carbon emissions, given these are around 76 per cent less than heavy good vehicles.” The group recommends that a formal process be created to take forward the government commitment to “consider how to make rail an even more attractive option for companies to move goods around the country”.

RFG see it as vital that rail freight is embedded in the freight plan being developed with the Energy Saving Trust agency and the Low Carbon Vehicle Partnership (LowCVP). “Rail freight doesn’t feature in the plan’s current strategic priorities”, says O’Donnell. “Missing this opportunity to reduce carbon emissions today could undermine our ability to reach net-zero by 2050. Using more rail freight makes significant carbon savings without waiting for the possible development of new technologies.”

The comments are made following the Rail Freight Group’s response to the government green paper ‘Decarbonising Transport Setting the Challenge’ which shapes what policies will be in the Transport Decarbonisation Plan.

In his summary, transport secretary Grant Shapps said “the scale of the challenge demands a step change in both the breadth and scale of ambition and we have a duty to act quickly and decisively to reduce emissions”. The Rail Freight Group is calling for those words to be backed by actions in the coming plan.