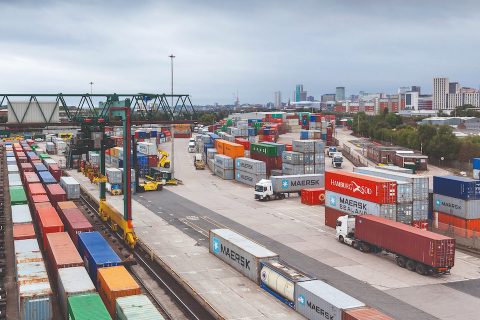 Lighter loads moved shorter distances. That could be the headline interpretation of the latest industry statistics from the UK Office of Rail and Road. Freight figures show the lowest total tonne-kilometre figures of the century so far. Despite the performance of the sector, and daily news of expansion, there are concerns that the effects of the coronavirus crisis are only signalled at in this last quarter analysis, and have yet to be recorded.

The latest quarterly statical data set from the Office of Rail and Road paints another picture that is at odds with the optimism and investment in the rail freight sector. Key indicators seems to be down across the board, while operators report new flows and infrastructure investors scramble to build new facilities.

The removal of coal traffic from the picture is still causing a statistical distortion. Although there are other factors to be taken into account, all other freight carried is still close to peak for the century – albeit on a shallow downward trend.

The total volume of rail freight moved dropped to 16.6 billion net tonne kilometres in the financial year 2019-20, its lowest total in 23 years. This is a five per cent decrease from the total in 2018-19. The total amount of freight lifted fell to 68.1 million tonnes, which is a ten per cent decrease from 2018-19. Volume is now the lowest total since 1984-85, but since solar panels and wind farms have replaced furnaces, there is an obvious reason for that change.

Other commodities down overall

The caveat in the last five years – since the introduction of carbon taxes and a government commitment to phase out fossil fuel production completely – has been the dramatic drop in coal movements. The removal of that dominant commodity is still working its way through the comparative statistics, significantly distorting the overall picture.

The quite stringent punctuality performance figures ask a lot of the industry. While the effect of the reduced passenger timetable is not reflected in this data set, the main ‘Freight Delivery Metric’ (FDM) recorded what the ORR called its lowest quarterly measure – 91.1 per cent, down 4.0 points from 2018-19 Q4. That still means that over nine in ten freight trains arrived at their destination within fifteen minutes of schedule. The ORR points out that storms and significant flooding across Britain in February saw delays to many train services across the network, which therefore affected the Q4 performance.

The composite moving annual average (MAA) which reflects the proportion of trains that met FDM in the past 12 months, stands at 93.4 per cent, which is just 0.4 points lower than it was in 2018-19 Q4. MAA helps to highlight any underlying trends which may be affecting performance in the sector.

Across all flows and all commodities, operators have been reporting that the rail freight sector has held up well in the face of the coronavirus crisis. Despite severe disruption to supply chain operations, rail freight has responded with reliable trains, running on time. Intermodals, carrying essential supplies have been transporting heavier loads, and bulk supplies have been running to support industry at large.

However, the picture presented by these figures represent a sunset on the days of normal, and only touch the effect of disrupted production, supply chain difficulties and lockdown. What the dawn may bring is still a case for speculation – something in which the official statisticians do not indulge. “These Q4 freight statistics have been affected by the Coronavirus pandemic, although the impact is small given the number of days affected up to the end of March 2020”, says the ORR. “We expect to see a more noticeable impact in the next statistical release, 2020-21 Q1 – April to June 2020.”

Those figures will be released toward the end of September. It could be a nervous summer of waiting for them to arrive.