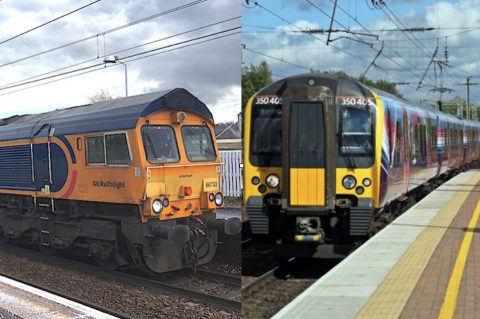 UK freight operators face additional traffic from today, as the government relaxes some lockdown regulations, and sanctions a more intensive passenger timetable. However, even though passenger traffic is back on the UK network, the passengers have yet to return.

Freight operators have gotten used to green signals on the line. In the eight weeks since the UK went into lockdown, traffic on the UK network has plummeted, with the passenger timetable greatly reduced, and freight traffic prioritised to ensure essential supplies are delivered.

The clear tracks have had some services running significantly early in many cases. One example has seen the Tyneside to Fort William bulk alumina tank flow run up to two hours early, benefitting from reduced commuter traffic, with timings around intensively trafficked Newcastle and Edinburgh greatly eased.

From today, Monday, the passenger timetable is restored to around seventy per cent of pre-coronavirus lockdown levels. At least, that is the case in England. The four nations of the United Kingdom have diverged in their approach to virus control. Northern Ireland, Scotland and Wales are all still enforcing stricter lockdown procedures.

The relaxation in England has not seen a mass return to the daily commute. Sky News in the UK called it “Hush Hour”, with crowd control measures at major London terminals coping well with very few passengers. Pictures have been shared on news services of stations in other parts of the country with very few customers.

Getting back to capacity

While freight services remain well loaded, it is a different story for passenger train operating companies. There may be more trains running, but on this first day, they are still running very lightly loaded services. Monday morning demand has been reported as low, and broadly unchanged from previous weeks. Reports of crowded metro series in London have not been replicated on longer distance services on mixed traffic routes.

The ramp-up of services in England is significant enough to bring some routes back to near capacity – particularly mixed traffic hotspots, such as the Manchester Castlefield corridor. The industry has not signalled any expectation of disruption, even if freight may not have the exclusivity experienced in recent weeks.

Freight operators have not been complacent though. The industry has been preparing for today – and has anticipated the return of passenger traffic. By midday on Monday, there had been no notable reports of disruption due to timetabling or capacity issues. In general, it has been business as normal for freight, albeit no reports fo trains running two hours early.

The near future may not be as rosy, though. While passenger services can be expected to make a gradual recovery, concerns have been expressed over a forthcoming, short-term, slump in freight demand.

Quarterly figures are due later in May from the Office of Rail and Road, the independently appointed regulator in the UK. Those figures will however not yet reflect the current position. We will have to wait until the August release for a clearer picture. At least we will not have to wait that long for the freight train from Fort William.