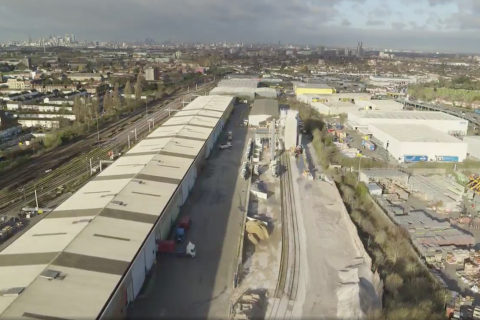 Down to earth construction terminal opens in London

All the grit, toil and spoil of construction. DB Cargo UK has announced the official opening of its new rail freight terminal in Cricklewood, north London, designed to deal will all that. The 151-hectare site will facilitate the movement of large volumes of aggregates and support the highly economically active construction industry in the capital.

In a glimmer of good news amid the coronavirus crisis, operations have started at the new terminal, serving London and the South East. On Monday of this week, the UK government began easing restrictions on social distancing and commerce (in England), which will allow the construction sector greater freedom to resume operations.

The Cricklewood site is well located to serve existing major schemes, including the redevelopment of the vast Brent Cross shopping complex, and the London end of the HS2 railway project.

Roger Neary, the head of sales at DB Cargo UK, said the new terminal would complement existing operations at other London sites at Bow East, Acton and Barking. “The new facility has been sympathetically designed to minimise the impact on the neighbouring community and has a major role to play in helping the government meet its challenging target of net zero greenhouse gas emissions by 2050”.

DB Cargo UK has been planning operations for over two years. Back in 2018, when RailFreight.com reported local authority planning consent, the reaction from lobby groups was favourable. Philippa Edmunds, Freight on Rail Manager for the Campaign for Better Transport said at the time that the development set a crucial precedent, as long as due consideration was given to the impact on the community. She said local authorities should support local rail freight terminals based on the wider benefits of rail freight.

“Cricklewood rail lands represent one of the few remaining suitable sites with good rail and road connections, where aggregates can be brought into the capital for use in construction projects. These operational railway lands have been safeguarded in the local plans for this purpose for many years”.

The new terminal provides a faster, more efficient and environmentally-friendly alternative to the movement of materials by road, says a statement from DB Cargo UK. Already, partners Tarmac and FCC Environment have started operations, with other operators discussing interests.

Construction company Tarmac plans to use Cricklewood to support customers involved in projects across North London, including the adjacent Brent Cross regeneration scheme, valued at 4.5 billion British Pounds (5.2 billion Euros). Tarmac head of rail, Chris Swan, said the site would be served from their operations in Greenwich, London and Tunstead, Derbyshire, and also help to support their commitment to sustainability and moving more material by rail. “As efforts continue to reduce carbon emissions and improve air quality in London, rail freight is becoming increasingly important for local development”, he said.

Around fifty per cent of aggregates in London are moved by rail, with each freight train capable of transporting enough material to construct up to 30 homes. However, the terminal is also designed to remove construction spoil by rail. Partner FCC Enviroment, represented at the recent opening by general manager Roland Williams, said installed facilities at the terminal were ready to receive up to 250,000 tonnes a year, with the potential to double that. “We are delighted to have opened up our third facility in London, allowing us to serve the construction industry in areas of London which are seeing a real increase in activity”, said Williams. “We have been looking to establish a facility in this location for some time and our partnership with DB Cargo UK has allowed us to do this”.

From Cricklewood, spoil will be taken by freight train to FCC Environment’s site at Calvert, Buckinghamshire and be re-used to restore a former quarry site there. The 7 million British Pounds (8 million Euros) investment at Cricklewood will also permit stock aggregates to be held on site, allowing clients to ‘backload’ when delivering spoil, further reducing road journeys through the capital.