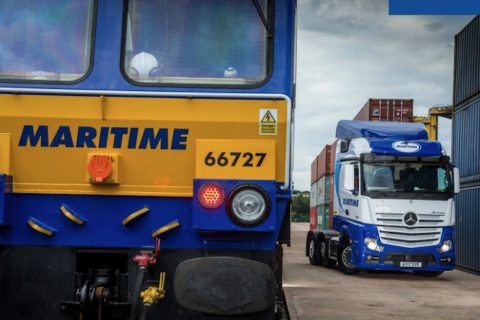 Containers mounting up in Britain due to closure factors

With Maritime Intermodal moving boxes to storage across the length of England, the UK could be heading for a container crunch, as too many ships arrive and too few shops are open. Ferries are sinking too, says shipping trade body.

As manufacturing hubs in the Far East crank up production, ships are arriving at European ports with cargoes ordered by retailers who are currently closed down, due to lockdown directives and the coronavirus crisis. That is causing a big problem for logistics operators in the UK, who face the prospect of running out of shoreside storage space.

Once again, it has been rail freight to the rescue, moving large quantities of intermodal traffic away from ports. Trainloads have been moved to inland facilities, which themselves are fast filling up.

Just last week, Maritime Intermodal launched a new rail freight service from DP World Southampton to its own terminal at East Midlands Gateway (EMG). The flow is designed to meet fast growing demand for container storage. It was the first-ever train from Southampton dispatched to the gateway.

The facility, at Castle Donington in Leicestershire, which only came on stream this year, is still under development but already it is proving successful. As reported at the time on RailFreight.com, when it is completed East Midlands Gateway will be able to handle up to sixteen 775-metre freight trains daily, and store up to 5,000 TEUs. That capacity might well be needed sooner rather than later.

The services from Southampton were hauled by DB Cargo UK motive power, and have the capacity to move up to 74 TEUs each way. Maritime’s eighth service to date ran for two days last week on Thursday and Friday (1 May). The company says the flow will eventually be utilised regularly, subject to container volumes.

Normally, containers destined for the large manufacturing and consumer conurbations in the East Midlands region would have been stored at Maritime’s Birmingham Intermodal Freight Terminal. However, that facility has recently seen a large increase in throughput. Maritime says that with EMG now capable of storing up to eighty per cent of its designed capacity, they will be able to cut journey times significantly whilst providing much greater flexibility and storage capacity until stock needs to be delivered. It is likely that the flow, or similar services, will be needed, at least in the coming few months. The disruption to the global supply chain could take several months to untangle.

The news comes hard on the stern of issues within the short-haul ferry fleet. That is proving a real concern for the representative industry body for ferry operators, and potentially a headache for rail freight operators too.

The UK Chamber of Shipping said a steep drop in passenger numbers due to the coronavirus pandemic meant it was fast becoming cheaper to stop using ships. Although there are no rail ferries operating into UK ports, rail does play a significant part in forwarding from the ports overall.

The majority of UK trade in goods is transported by sea, and up to fifty per cent of the nation’s food is imported. The Chamber has warned that if businesses severely cut back services, then supplies of food, medical equipment and other imported goods would be put at risk. Ferry services are just days away from being severely reduced, the group said.

It is not clear if the rail freight industry would be asked to step in, and potentially haul more goods from Europe, via the Channel Tunnel. However, in the meantime, the UK government Department for Transport has said it will continue to engage with ferry companies.

Meanwhile, Maritime Intermodal, which celebrated its first anniversary recently, is set to ramp up services from Southampton if demand makes it necessary. “This new service really highlights the importance Maritime and the wider logistics industry plays in keeping Britain moving during this difficult period”, stated John Williams, Maritime’s Group Executive Chairman. “I am so impressed with our drivers and office-based staff; their commitment and determination to keep working so tirelessly and to serve our customers is nothing short of incredible. We will continue to do whatever we can to support our customers during the pandemic and providing them with reliable, cost-effective, and sustainable solutions to moving and storing their goods”.

With Prime Minister Boris Johnson scheduled to address the nation on Sunday, there is speculation that the lockdown will begin to ease in the UK from as early as next week. However, getting the retail supply chain in order will take considerably longer. Maritime, and other operators, are expecting pandemic workloads to continue for a while to come.