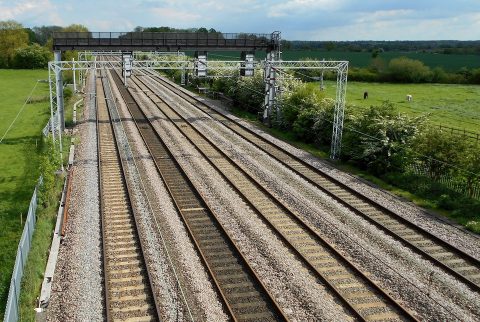 An expected but delayed decision has gone in favour of a significant new freight handling facility, connected to the West Coast Main Line and in part built, controversially, on green belt land.

Work on Britain’s newest designated Strategic Rail freight Interchange (SRFI) could soon be under way, just north of Wolverhampton. That is the prospect for industry and communities, after the West Midlands Interchange (WMI) project cleared the development consent stage, and the UK government effectively approved the project. The decision was delayed, as reported recently by RailFreight.com here.

According to the the development website, WMI will provide up to 743,200 square metres of new rail-served and rail-linked warehousing. It has been compared to the area of 430 football pitches. The rail element has been sanctioned as an early part of the development, and not dependent on full-occupancy of the site.

The scheme will create 8,550 direct jobs boosting opportunities for people in South Staffordshire, the Black Country, the West Midlands and other surrounding areas, argue the developers. “A SRFI is something this part of the West Midlands has needed for a long time”, says their statement. “The region’s strong manufacturing and exporting businesses need faster, more reliable transport links now and in future to stay competitive at home and abroad.”

The project has proved hugely divisive in the local community. In an area that has been heavily industrialised for generations, earning it the common name of the Black Country, the new facility will encompass almost 300 hectares of green belt land. The local Member of Parliament Gavin Williamson has been reported locally as decrying the development. “It has shown no regard or consideration for the thoughts of local people”, he told local media. “The only one decent element of it is that they have made conditions about the fact that they have to build the rail interchange at the early stage of the development.”

The planning decision, signed off by Grant Shapps, the UK Secretary of State for Transport, makes lengthy mention of the encroachment into the existing natural habitat. However, after years of consultation, the Planning Inspectorate recommended approval.

The chief executive of the planning agency, Sarah Richards, said the project had been examined within the legislative framework. “The Planning Inspectorate is committed to giving local communities the opportunity of being involved in the examination of projects that may affect them. Local people, the local authority and other interested parties were able to participate in a six-month long examination. The examining authority listened and gave full consideration to local views before making their recommendation.”

Logistically, according to the National Infrastructure Planning agency, detailed proposals are still evolving. However, they expect the WMI to include, as a principal element, an intermodal freight terminal accommodating up to ten trains per day of up to 775m.

The new rail facility will be connected to the West Coast Main Line, via the loop that serves the Black Country’s main cites of Wolverhampton, Birmingham and Coventry. The interchange will be a short distance south of the HS2 construction freight hub at Stone, in Staffordshire.