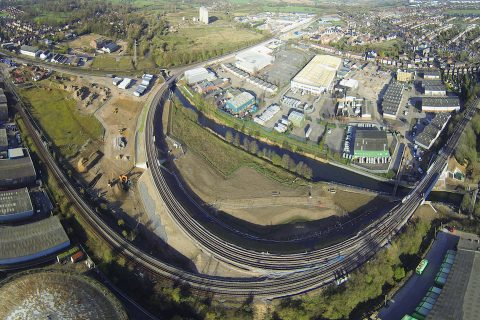 Published on 30-04-2020 at 11:50
Panoramic aerial views of the Ipswich Chord Project seen from Boss Hall Junction at the eastern-Felixstowe side of the Chord as it crosses over the River Gipping (Network Rail).

The UK government Department for Transport has said it will make a delayed decision on the much anticipated new freight handling facility West Midlands Interchange after the weekend. Grant Shapps, the UK Secretary of State for Transport, has said he will issue a decision in the next few days.

The new, designated strategic rail freight interchange is proposed for a site just north of the city of Wolverhampton, on the West Coast Main Line loop corridor that serves Birmingham and the Black Country, the historic heart of Britain’s heavy industry.

The decision, after a lengthy planning and consultation process, was due by 27 February, but has been extended until 5 May (next Tuesday) at the latest. A brief statement from the DfT says that the delay is to allow for further work to be carried out before issuing a determination. the delay is also applied to four road and bridge projects, including controversial works around prehistoric Stonehenge in Wiltshire.

Infrastructure development is considered critical to growth in the UK rail freight industry. The UK government has pledged to develop the sector as a key part of its overall agenda to decarbonise the economy in the long term.

High population density and congestion in the area have been concerns expressed in the consultation stages. The West Midlands Interchange proposal has attracted considerable interest from stakeholders and communities, given the significant industrial development proposed. The promoting consortium Four Ashes Limited has put forward plans for of a new strategic rail freight interchange and other supporting infrastructure works near Junction 12 of the M6 motorway. The Strategic Rail Freight Interchange (SRFI) would be include almost three-quarters of a million square metres of rail-served and rail-linked warehousing and associated development.

According to the promotors, the West Midlands is a strong manufacturing and logistics industrial base, with growth potential. “There is a shortage of suitable quality development land for large scale rail-served logistics warehousing”, says a statement. “A SRFI is something this part of the West Midlands has needed for a long time. The region’s strong manufacturing and exporting businesses need faster, more reliable transport links now and in future to stay competitive at home and abroad”.

The promoters point to several other rail-connected projects already delivered by partners within the consortium, including a project for Jaguar Land Rover at Castle Bromwich, also in the West Midlands. Since the UK general election in December last year, government policy has shifted significantly in favour of rail development, and many commentators are now calling for action to back up those words. Media speculation is mounting that the interchange with be given the green light before this new deadline.