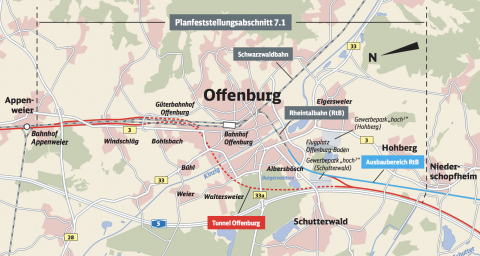 The project on Germany’s largest tunnel, the Offenburg Tunnel, has entered a new phase. Deutsche Bahn has invited the public to three information sessions, in which it will outline its plans for the construction of the 11km freight dedicated structure.

Although subjective to a change of date due to the corona crisis, the infrastructure manager of German’s railway network announced three dates for the public sessions: on 5, 13 and 19 May. The organisation of these events means completion of preliminary planning. Indeed, this phase was completed by the end of 2019, Deutsche Bahn said.

Once the tunnel is in operation, it will be primarily used by freight trains, whereas passenger trains will run above the ground. By using the underground tunnel, freight trains bypass Offernburg’s Main station. It is designed for a maximum speed of 120 km/h and consists of ta single-track twin tube: one of 11 km length and one 9km long.

Preliminary planning started in 2017. Several options have been discussed regarding the point of connection in the north and the south. Environmental planning as well as noise and vibration protection tests are also part of this phase.

Once public consultation is compleyted, the project will be subjected to an administrative planning approval procedure. This is not expected to start before 2021. The Offenburg Tunnel works will start in 2026 and are planned to be finished by 2035.