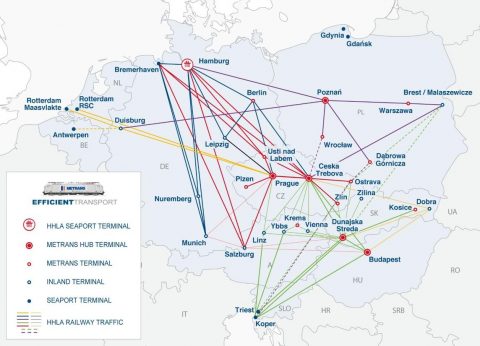 Metrans has expanded its intermodal service between the port of Rotterdam and its Czech destinations of Prague and Česká Třebová. Starting from 6 April, two additional departures have been launched in both directions. This brings the total offer to 11 train pairs per week.

This was announced by the intermodal operator, a subsidiary of HHLA. The intermodal line connects Rotterdam’s Rail Service Center with the two cities in Czech Republic. From here, it connects to Slovakia, Hungary, Poland, Austria and other countries in the region.

Although Metrans has an extended network of terminals and intermodal lines across Europe, its most important nodes are in Czech Republic. In November last year the company opened a new intermodal terminal in Königs Wusterhausen, in the vicinity of Berlin. The facility was launched in partnership with LUTRA, operator of GVZ Schönefelder Kreuz logistics centre and meant to improve the intermodal connection of the German seaports of Hamburg and Bremerhaven with Prague and Česká Třebová.

Czech is also an important destination for rail freight from China, and visa versa. In March last year, the first weekly rail freight service was launched between Česká Třebová and Xi’an, one of China’s main hubs on the New Silk Road. In September, this service was upgraded with a second weekly departure. The journey takes around 13 days.

At the RailFreight Summit Poland, to be held in Poznan on 1, 2 and 3 September, Martin Koubek represent Metrans as a speaker on the conference programme. He will contribute with a presentation about the set up of a successful network of hubs.

“Creating a hub concept in Central and Eastern Europe with connection to different ports, that is a trade mark of Metrans”, he says. “A good hub and spoke system brings in the Silk Road trains more effectively and more flexibly as the train from China might arrive with cargo destined for several countries and cities across Europe.”

Registration for this event is now open. You can view the programme here.