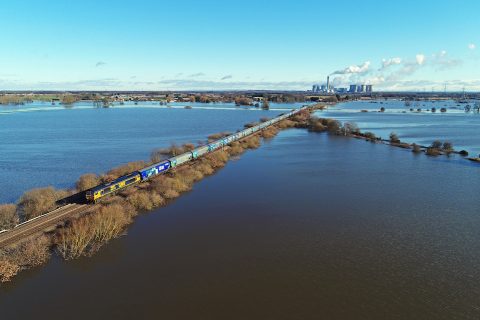 Britain has the energy to recover, from winter flooding and more

It was dubbed Drax-on-Sea after the River Aire burst its banks and flooded south Yorkshire in February. Britain’s biggest conventional power station complex has, nonetheless, continued to operate largely due to the efforts of the rail freight sector and infrastructure engineers. Now, as one natural disaster follows after another, those efforts are proving even more valuable to the country.

Less than two months ago, Britain was still reeling from an unbroken series of winter storms, which had damaged infrastructure and left communities with a mammoth clean up task. From the west of England, through central Wales to the west of Scotland, vital services, including railway lines were submerged under record rainfall.

Back then extensive flooding

Yet, none has been more dramatic than the flooding caused by the River Aire in South Yorkshire, which encircled the Drax Power Station complex, regarded as Britain’s best known industrial landmark, and vital to the energy supply of the entire country. The remarkable image in our headline, captured by Chris Davis, shows the extent of the February floods around Drax, as a GBRf biomass train makes its way from the power station.

Severe storms and flooding in the River Aire basin resulted in damage to rail routes used by the extensive timetable of trains delivering biomass to the huge site. The section worst affected was between Hensall Junction and Selby, which significantly disrupted operations. Contractor GB Railfreight has been working closely with Drax to reschedule rail deliveries and maximise capacity on the rail links while the repairs are completed. Maintaining supplies of biomass are needed for Drax to remain at capacity to generate electricity for up to four million households.

Now, as the waters recede and lines are repaired, the power station and rail freight operators are facing up to the new challenge of keeping the lights on during coronavirus crisis. John Smith, managing director of GB Railfreight, said the is playing its part, and their partnership with Drax was a highly visible example. “We are delivering sustainable biomass across the country by rail to Drax, which supplies five percent of the UK’s electricity needs”, he said. “We will be redoubling our efforts to ensure we keep the country going during these trying times”.

Over the years, Drax has been progressively converted from coal-fired to biomass, and to satisfy its appetite, GBRf runs up to 24 trains a week from the Port of Tyne to Drax Power Station and up to 38 trains a week from Liverpool. The power station complex also has capacity to be supplied from several other ports, including Tyne (Newcastle), Hull and Immingham. Drax CEO Will Gardiner praised the rail freight sector. “The teams who are working tirelessly across the UK rail freight system are doing a tremendous job”, he said. “GBRf’s rail deliveries are an important part of our global supply chain for sustainable biomass that supports thousands of jobs and has delivered economic growth across the north of England and in the US south.”

Tasked with keeping the lines open to traffic, Network Rail have had their work cut out too. Nick King, the group director for network services at the infrastructure agency said the railway plays a crucial part in keeping Britain running, particularly in these challenging times. “Recent flooding in this area brought additional challenges to keeping services moving, however the hard work and dedication of our people has meant that vital supplies of sustainable biomass have continued to be transported. Strong teamwork across the rail industry is absolutely key in keeping freight services moving”.

Among the works necessary to reopen the flooded line, Network Rail are installing iron piles, 15 metres deep, to allow ground work to be carried out safely. The line is expected to reopen later this month.

In a neighbourly gesture which hasn’t been overlooked, Drax has donated 25,000GBP (29,000euro) to Snaith Priory, a local religious centre, who are helping coordinate support for those worst affected by the flooding in the communities locally.