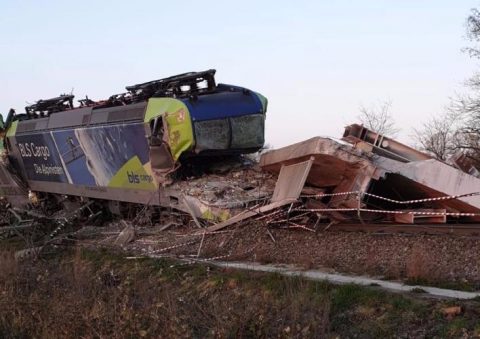 Line closure Rhine-Alpine corridor: have we learned our lessons?

An accident on a vital railway line in Germany once again drew all eyes to the Rhine Alpine corridor, where the infamous Rastatt incident took place nearly three years ago. Is the European rail freight industry able to respond to a line closure of this magnitude today?

On the night of Thursday 2 April a terrible accident took place on the railway line near Augen, Germany. One person died and part of the railway line was badly damaged. Right away, the line was closed for all traffic from Freiburg up till Basel in Switzerland. This is a vital line on the corridor between the Netherlands and Italy. The closure should take until at least Wednesday 8 April.

The largest operator on the route, Hupac Intermodal, said on Monday that the line closure has had a high impact on their operations. “We are only able to run a part of our scheduled departures, but most of our trains have not been able to run”, says a spokesperson of the company. The company operates several trains per week on the corridor.

Distri Rail, a forwarding company from the Netherlands may have been impacted a little less, but that is only because it deals with less volume on the route. “But we have felt the impact. Last week we lost two roundtrips. This week, considering that the line reopens after Wednesday, we lose five roundtrips”, says Managing Director Dennis de Roo.

Why do operators lose out on business? This time, traffic did not come to a complete standstill. There are alternative routes available, based on the off-the-shelf rerouting plan that was drafted after the Rastatt incident. There are several alternative routes, explains a spokesperson of the Regional Association Southern Upper Rhine, which is part of the crisis management. ”In Germany, there is the route via Singen and the route via the Black Forest, passing Offenburg. There is capacity for 60 trains per day via these routes.”

An alternative routes via France is also available, explains a spokesperson of the North Sea-Mediterranean Corridor. This route leads via Strasbourg and follows the Rhine on the French side. In total, seven trains have been redirected via this route. “This is despite the restrictions on the French network at the moment”, the spokesperson said. France is facing a shortage in staff due to the coronavirus, leading to limited availability on the railway network.

Yet, this is not enough capacity to operate all daily trains, the operators explain. “Over the weekend these routes were already heavily used, and there is more traffic during the week. Despite a slowdown on passenger traffic, there is simply not enough capacity via these routes”, says Hans-Willem Vroon from RailGood, a lobby organisation in the Netherlands.

Furthermore, there are restrictions on these lines that make that not every type of train can be operated on these lines. “There are train length and tonnage restrictions”, explains Vroon. Hupac says it is unable to operate its P400 semitrailers via the reroutings. The P400 trailer has 3 metres of internal height, good for three levels of pallets.

According to the spokesperson of the North Sea-Mediterranean Corridor, the French infrastructure manager has done a good job in providing capacity under current circumstances. “This met almost all demand for capacity on this rerouting.” However, there was limited demand, as most prefer the routes via Germany.

According to the Regional Association Southern Upper Rhine spokesperson, not all reroutings have been utilised. “We are dealing with a short-term line closure. In such a case not all the alternative lines are allocated. In case of a long-term line closure, more lines could be opened. But we expect that the Freiburg-Basel is re-opened on Wednesday evening, or Thursday morning.” It is worth noting that the lines are allocated by the infrastructure manager, in this case DB Netze.

The opening and allocation of alternative routes are all processes described in the Handbook for International Contingency Management. This is a set of rules formed after the Rastatt incident, which paralysed rail freight traffic on the Rhine-Alpine Corridor for seven weeks in summer 2017. The handbook was published in May 2018. An international disruption was been defined as a disruptions with a forecasted impact on the affected section of more than three calendar days and high impact on international traffic. Hence, it was applicable to the Freiburg-Basel closure.

In general, the response to this short-term crisis has been well-organised, thinks the Regional Association Southern Upper Rhine. “All relevant steps were taken.” According to the spokesperson, there were no cancellations of train operations, but operators have had to delay their departures.

“As European rail parties, we have learned from the major incident at Rastatt that we want to and can help each other”, commented Dutch infrastructure manager ProRail. “That is why we participated in international consultations on Friday morning to find joint solutions in this area, in order to keep the much-needed freight transport flows moving wherever possible.”

More to be achieved

But, if you ask Hupac, the capacity was simply not enough for the impacted operators. “There are still things to be achieved and lessons to be learned. It would be interesting to carry out an analysis, or add a new lesson learned based on this incident in Augen”, said a spokesperson of the company.

The reroutings were certainly better organised than with the Rastatt closure, agrees Vroon. “But that is not surprising, it could not be worse than that. There is still a lot to be achieved, but change happens only slowly in the railway sector.”