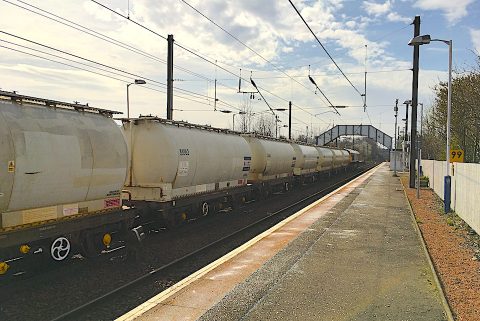 The latest figures from the Office of Rail and Road crept out in the first week of March. They show a slight decline in freight traffic metrics on Britain’s railways. The fourth quarter will likely show little change, but there is speculation that the next set of figures will be alarming to say the least.

The winter figures, from October to December 2019, point to continuing trend, as the manifest of rail freight evolves further away from the heavy base materials of smoke-stack industry, and carries more and more sophisticated finished products.

The throne vacated by king coal has yet to be filled, and the ripples are still working their way through the freight figures. The vast tonnage that once supported the entire railway network and much of the UK economy has all but vanished, with the last significant flows switched off in the past twelve months.

Consequently, there is an anomalous decline in tonne-kilometres of freight moved. The year-on-year figure in the latest statistics show an eight percent drop, to a fraction under four billion net tonne-kilometres. That’s the lowest measure by that metric in the past twenty years.

That does not however reflect an overall decline in rail freight. Far from it. There is however a significant shift towards intermodal traffic as the staple of the freight industry. Forty-two percent of all net tonne-kilometres is accounted for by ubiquitous big steel boxes.

While anecdotally rail freight is best suited to bulk materials, there are declines in many flows. Despite traffic wins by a number of operators, there are lower figures for oil products, metals, and construction materials.

No rise in road

Further analysis may be needed to identify the root causes behind those figures, but a number of factors could be contributors, such as continued shift away from fossil fuels; deindustrialisation; and sources of raw materials closer to market centres, requiring shorter runs to deliver bulk materials. There certainly does not appear to be any significant rise in bulks by other modes – which in the UK is almost exclusively road transport.

However, with coal removed from the equation, the absolute weight of freight lifted in Q3 was significantly lower, at 15.3 million tonnes. That’s twenty percent down, year-on-year, and again a new low for the statistic over a twenty-year period.

On time most of the time

Rail freight is still relatively reliable. More than nine out of ten trains arrive within fifteen minutes of schedule. That’s comparable with most passenger operators, although such comparisons will be almost irrelevant by Q1 of this financial year.

DB Cargo remains the largest operator, when measured by overall kilometres moved, although their market share has declined by nine percentage points over a five-year period, while all the other main operators have gained – Freightliner excepted.

The shake-up wrought by the Coronavirus crisis will turn the next few quarters stats on their collective heads. This may be the last normal data set for sometime. As such, Q3 of 2019-20 might be considered the baseline for operations in the sector. Until then, planning may be more speculation than statistical analysis. The end of May could indeed produce figures that will be eye-opening.