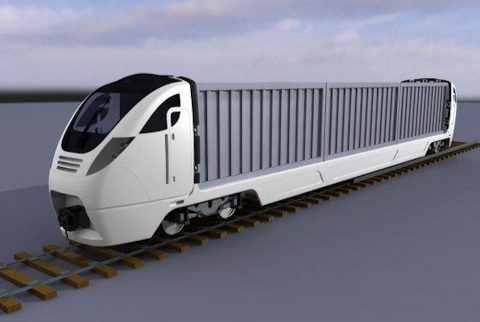 The debate continues over a modern version of enterprise trains as an answer to urban congestion and environmental concerns. A radical modular approach, combining the best of rail, tram and road in one package, is a solution put forward for government to consider.

We recently covered radical plans to redevelop Doncaster-Sheffield, popularly known as Robin Hood Airport, in the north of England. Freight will play a big part in reviving the fortunes of the underperforming airport. Plans include a logistics hub directly parallel to the main runway, with rail integral to the success of the project.

Rail has the means

there is just one problem with that. Not even the biggest cargo carrying Airbus, Antonov or Boeing gets anywhere near filling a freight train. What airfreight does best is high-value, high-speed, low-volume. Rail certainly has the means to play a part in the first two elements of that scenario. To make it a treble success, TruckTrain could be an answer.

Phil Mortimer is the champion of a novel solution to making rail operations fit the logistics of modern, low-volume freight. Places like a rejuvenated Robin Hood Airport could be an ideal test bed. “The constraints on inter-modal were the focus of a sponsored R&D project to determine if a rail/inter-modal service offer could compete with all-road competing services for domestic traffic”, he says.

The idea Mortimer puts forward is a for a radical new design of short formed, single unit “trucktrains”, which can be coupled up as necessary. Crucially, they can access all of the network, reaching into both the urban centres and the outlying rural hinterland with ease. That extends the reach of rail to a whole new suite of railheads, nearer to many more customers, and it gets there quickly too.

It is a concept that has caught the attention of the UK government, where a report has been commissioned and received by the Department for Transport (DfT). “Effectively we were proposing the use of shorter, faster and more intensively used train services to bring the cost base of the rail /inter-modal option to parity with road services”, says Mortimer.

The report, entitled “F3 (Fast, Frequent, Fulfilment) Project for Freight by Rail”, proposes that, while there may be the need for the DfT and Network Rail to invest in infrastructure, and provide explicit financial support for the development of new terminals, there is a business case to be made.

“Network Rail needs to be encouraged to think beyond simple renewals of infrastructure, to see if minor increases in expenditure, for example at junctions, would create further train paths, for sale to either passenger or freight customers”, says the report.

Although the concept vehicle remains on the drawing board, there have been field trials to provide some proof of idea. However, the report was critical of the rail sector, for a perceived reliance on traditional markets. “It has a major credibility gap to overcome in relation to the development and delivery of new product and service offers”, it says. “The inter-modal sector has been identified in various industry strategies as a target market for rail but with little understanding that the logistics sector is a very different market to bulk flows upon which it has relied excessively”.

The report goes on to say that rail’s low margins and risk aversion are limiting its investment in assets, particularly wagons, but also train drivers, which might be available for the domestic inter-modal, as well as others, including short-term contract markets, thereby prejudicing its ability even to tender for marginal traffic. These are claims that would be vociferously refuted by the industry, which would point to recent procurements and recruitment drives. However, the potential for the rail freight sector is also significant, and it could be argued that investment in resources and personnel is merely addressing existing demand.

Mortimer is aware though that the TruckTrain concept requires a few adverse signals to turn green. “To succeed demands a very different approach. Whether the rail freight sector has any real appetite for this remains to be seen. There is still a lot of risk averse thinking pervading the sector”.

Perhaps more projects like Robin Hood Airport, championed from outside the sector, are the answer. Maybe Mortimer is guilty fo a little cautious optimism too, and the rail freight sector may be more willing to embrace change in a changing world.

For more on the subject of enterprise trains for the modern railway, see our story here. You can read more about the plans for Doncaster-Sheffield Robin Hood Airport here.