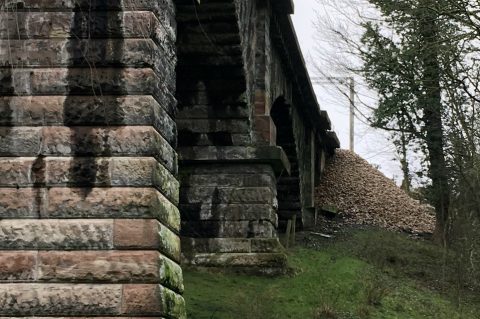 380 tonnes of rock and a lot of work later. With only a speed restriction still in place, Britain’s busiest mixed-use line has been restored to full operations after a weekend landslip reduced the West Coast Main Line to a single track, without passing places.

Emergency work to secure a landslip-hit section of the West Coast Main Line near Warrington has successfully reopened the railway a day ahead of schedule. Historic Dutton Viaduct over the River Weaver near Acton Bridge was forced to close southbound last Sunday. The river swelled after a sustained assault from Storm Jorge, the latest winter weather system to batter Britain. Read our original breaking news story here.

A rain respite, if not exactly a balmy evening, allowed Network Rail engineers twelve uninterrupted hours on Monday night and Tuesday morning. During the hours of darkness, 380 tonnes of rock were delivered to strengthen the damaged embankment.

There is more work to be done. Around 100 tonnes more reinforcement stone will be added when trains are not running over the next two nights. A 20mph (32kph) speed limit over the viaduct will remain in force while ground conditions are closely monitored.

Bridge not too far

Freight services faced lengthy diversions. Weaver Junction, a major route to and from Liverpool just north of the incident, was rendered difficult to access. The most obvious alternative took traffic via Manchester and the congested Castlefield Corridor.

Phil James, director for Network Rail’s North West route, thanked everyone for their patience. “We have been working hard to make Dutton Viaduct safe for trains again. The last 48 hours will have been tough and for that I can only apologise. Our priority was to make the railway safe and get it back up and running again as soon as we could, and I am glad to say we have done this faster than expected”.

Will the UK network cope with the expected increase in freight services, as the climate change agenda gains pace, and road logistics become less attractive? Some of those diverted services passed through Manchster, were a major new industry conference is set to be held next month. The RailFreight Summit UK takes place on 7 April in Manchester, Britain’s fastest-growing regional economy and an industrial hub, where rail plays a vital role in supporting development and enterprise. Registration for this event is now open. For more information, visit the event website.