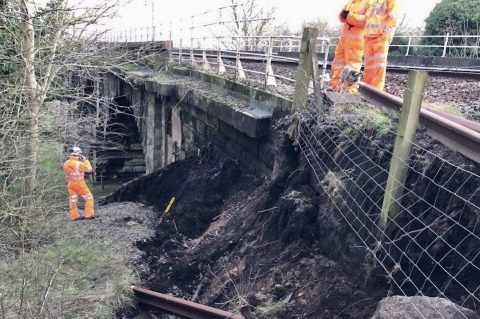 Storm damage has closed the southbound side of UK’s West Coast Main Line between Warrington and Crewe, causing major disruption. The busiest mixed-used line in the country has suffered a landslip in the north of England, affecting all operations as far distant as London and Scotland.

This was confirmed by Network Rail, the infrastructure manager of the country. Storm Jorge blew out the wettest February on record with one final flourish. Heavy rain and a swollen river has caused damage to the trackbed at Dutton Viaduct, where the line crosses the River Weaver.

On Monday night, say Network Rail, hundreds of tonnes of rock is being delivered used to reinforce the embankment where the earth has slipped. While temporary repairs takes place, the railway will be closed in both directions from 7.30pm on Monday 2 March for twelve hours. If the strengthening work proves successful, its hoped both lines can reopen to trains by Wednesday. When the line does reopen, it is likely a temporary speed limit will be put in place while engineers carefully monitor the location.

Only one track open

The intensively used mixed-traffic line faces major disruption to passenger and freight services while repairs are underway. One track, the northbound line, remains open, but passenger services are badly hit with bus replacement in operation. Freight services not originating locally do have alternatives, but they face the prospect of diversion through Manchester’s already busy Castlefield Corridor, where limited additional paths are available.

The incident is just south of north-facing Weaver Junction to Runcorn and Liverpool, making use of that diversionary route problematical. Network Rail have said the scale of the landslip means the railway is expected to be shut for several days, causing disruption along the entire West Coast Main Line.

Tim Shoveller, managing director for Network Rail’s North West and Central region, sympathised. “Sorry to all affected by this emergency line closure. Safety is our priority and the seriousness of this landslip means we have had no choice but to close one line at Dutton Viaduct. Our engineers will be working round the clock to make railway safe again”.

Network Rail engineers have been battling against the elements in recent weeks, with three major storms over consecutive weekends. These storms have left ground saturated and, in some cases, prone to slips like this one.The UK Met Office has now confirmed last month was the wettest February on record.