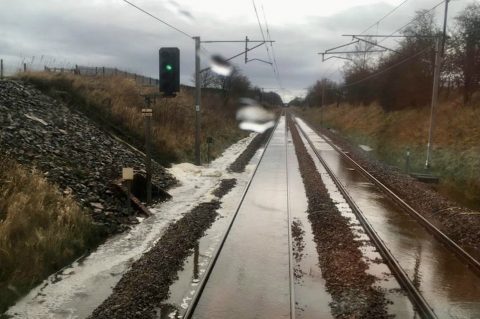 Storm-battered Britain braces for another onslaught

The UK rail network has been hit by an unbroken chain of severe winter storms. With repairs underway in many locations, there is yet another weather system on its way for this weekend.

With several lines under flood water or under threat of storm damage, Britain’s busy rail network is feeling the strain. If there is anything that can take the British headlines away from Brexit and coronavirus, it is the national preoccupation with the weather.

This weekend, Storm Jorge is expected to deliver 60-80mm of rain, and gale force winds. While that will not quite blow wagons off the tracks (a phenomenon American operators have experienced) it will mean a watch is necessary for damage to line-side vegetation and overhead wires. As always, there is cooperation with the likes of the UK Meteorological Office and the national environment agencies.

In Wales, the geography of deep valleys and a wet climate often make operations challenging. Network Rail has been flat our repairing rails ravaged by a procession of Brendan, Ciara and Dennis, and are now bracing for Storm Jorge. Ten lines reopened this week, but engineers remain on high alert for the entire network this weekend.

Chris Pearce, Network Rail’s head of operations delivery for Wales and Borders, praised the work of repair teams. “I’d like to thank the Network Rail teams who have been on site around the clock and in difficult weather conditions who have worked tirelessly in their efforts”, he said.

The situation in Wales is improving, although there remain two official flood warnings from the Met Office. In perspective, England still has a frightening 198 warnings in place.

In Scotland, the line between Kilmarnock and the English border remains blocked by a landslip. That leaves the West Coast Main Line as the only route north from the important junction town of Carlisle – which is prone to flooding itself.

On the other side of the country, York is frequently in the news for flood issues. As an even more complex railway junction, the town’s railways are under constant scrutiny for the effects of bad weather. Currently, although parts of the town are under water, the railways continue to operate.

Maintenance and repair crews have already been stretched by scheduled works, and the two recent derailments, at Barking in London and Eastleigh near Southampton. Both those works have been reopened – there is just a day of work remaining at Eastleigh.

As an island off the west coast of Europe, the worst of the Atlantic storms are nothing new to the British Isles. However, with this season proving to be one of the most challenging on record, it is not just operators who are looking forward to the respite of Spring.

Weather at the Summit

Will the weather be on the agenda at RailFreight Summit UK in April? It may be the talk of the networking sessions but there is plenty more to discuss in Manchester on 7 April. More details here.

Free webinar about the rail freight potential of Hungary