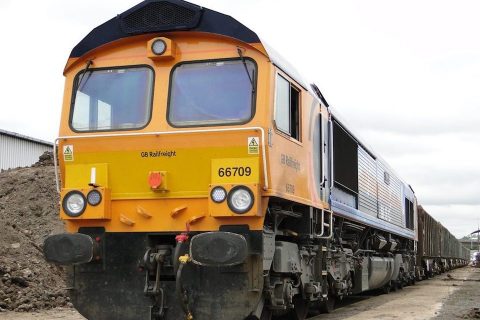 GB Railfreight has started moving construction waste generated by several major projects around London. The flows run from a dedicated terminal to a Home Counties landfill, taking around 60 trucks off the roads every day.

If there is one sure sign of a resurgence in the construction industry, it is a growing mound of site clearance waste. Everything from remediated soils to demolition remains. Around London, there are growing mounds, from Old Oak Common, where the vast HS2 complex is taking shape, to new developments in the booming East End.

All that activity has prompted a return to the rails for GB Railfreight’s daily waste handling trains. At around 1,500 tonnes of soil and rubble on each working, they are proving a valuable resource for major projects such as the Brent Cross redevelopment in north London, which GBRf has been helping to clear and construct since last November.

The vast shopping centre, at one time revolutionary but now outdated, is the centre of a huge project, which is generating traffic for the adjacent S Walsh and Sons waste transfer station in neighbouring Cricklewood. GBRf pick up the loads, five times a week. From there it is fifty miles (80km) to the FCC Environment landfill at Calvert in Buckinghamshire.

According to GBRf, an average waste materials train removes 60 HGV journeys from the roads, and rail already accounts for forty per cent of all construction material movements into London. The company says there is the potential for this to grow, reducing lorry miles on the capital’s roads still further.

“We are delighted to have recommenced services from Cricklewood. We look forward to working with S Walsh and Sons in the future to build a successful partnership”, says John Smith, managing director. “This contract is also an important step towards reducing traffic in London and, by extension, improving air quality in the capital. This is even more important in the context of reducing carbon emissions if we are to reach the Government’s ambitious net zero target by 2050”.

Since the Cricklewood facility opened in 2015, more than one million tonnes of building and construction waste has been moved out of London by rail. Redundant rebar and cracked concrete are not the first waste products on rails.

Although now falling out of favour, much domestic waste has historically been moved around the UK by rail. Since the 1970s, a number of local authorities, notably in London, Manchester and Edinburgh, made use of centralised, rail connected facilities to either move compacted waste to landfill sites, or take away the ash by-products from incinerators that were used to generate energy from burning it.

Taxation on landfill, and a growing awareness of recycling, has reduced that “binliner” traffic considerably. Ironically, in Edinburgh, where the former rail-connected plant was replaced by a more modern one built on a former railway marshalling yard, adjacent to the recently opened Borders Railway, no rail connection was deemed necessary. Road traffic accesses the site by a bridge, which had to be built over the railway. In years to come, that may well be deemed as something of a … wasted opportunity.