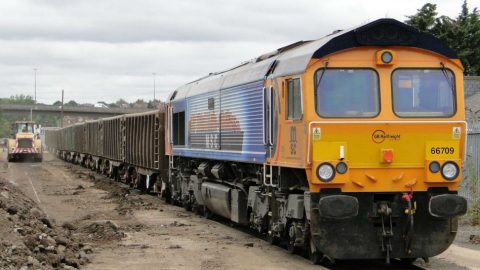 The head of a leading rail freight operator in Britain has made its case for more business in Scotland, which would grow the overall market and reduce rural road miles.

John Smith, the founder and chief executive of GB Railfreight, which directly employs around 900 staff in the UK, has told regional newspapers that he wants to win more business in Scotland, and, to see that as new business for the rail freight sector overall.

Post Brexit, the Scottish government is aware that economic links with Europe will be vital to the regional economy. Export traffic will play a part in that, which could mean new opportunities for companies like GB Railfreight.

Several new flows were discussed in an interview given to the Scotland on Sunday and Scotsman newspapers. Among those discussed were new ventures such as the shipment of whisky, which is traditionally distilled in rural locations, close to sources of raw materials, primarily barley and water. Smith also mooted the movement of bottled water itself, citing the development by manufacturers Highland Spring, who are building rail freight facilities at their premises in the village of Blackford in rural Perthshire, about 60 miles (100km) north of Glasgow and Edinburgh. RailFreight.com visited the development there in Autumn last year and noted it in our examination of enterprise trains (see: UK’s enterprise trains).

Smith says that the great strength of rail freight – that is to move large volumes efficiently and with low environmental impact – is also the weakness of the system. Finding large enough tonnages to make rail economically viable is a challenge. The case of Highland Spring mineral water is an example where centralised production of a consumer product means that there is sufficient volume to make the switch to rail viable (RailFreight.com will be returning to Highland Spring to update as the project progresses).

The growth of intermodal traffic is also in GBRf’s sights. Scotland’s geographical position in the north of Britain and the edge of the European market, makes road transport more marginal than for other parts of Great Britain. In the interview, Smith thinks there are opportunities for increased flows between Scotland and the English Midlands, where new rail distribution facilities and inland ports are coming on stream. That may mean more facilities – like Highland Spring’s Blackford terminal – can be considered, perhaps on a shared commercial basis.

However, Smith also has his eye on Scotland for more traditional rail-born commodities. GB Railfreight was heavily involved in the Scottish coal mining industry, which is now defunct. Coal movements are confined to a relatively small tonnage moved from deep sea ports to industrial locations. However, while that market has gone, Smith identified another commodity that Scotland has in abundance, and requires movement to markets.

Raw timber was previously moved extensively by rail, and Smith sees opportunities there. The interview hints that the company is considering operations in the West Highlands, specifically mentioning the Rannoch area – renowned as among the most remote industrial operations in the whole of Europe, and an area served by a marginal railway line, which would benefit from increased traffic.

GBRf already contributes indirectly to flows on the West Highland line – being the motive power operator behind the luxury cruise trains that ply the spectacular route, and also as hauler of the sleeper service that connects the area directly with London. However, sleeping like a log and hauling logs are different operations. Ambitions for the latter traffic are quite plausible, as we examined recently (see:Future for UK timber trains in Scotland)

Adding to the overall rail freight traffic is not an ambition confined to GBRf. Other operators have eye on the potential for new business north of the Border. Scottish freight could contribute much more significantly to the UK industry in the future and the new race to the north is just beginning.