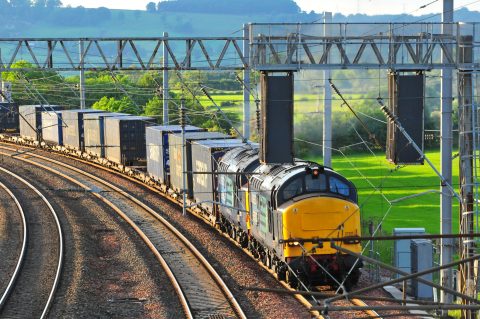 Getting more freight onto the UK’s railways and off the UK’s roads, is dependent on making schedules more reliable, says Network Rail, the agency responsible for infrastructure capacity. Easier said than done says everyone else.

Network Rail, the UK-government agency tasked with operations, maintenance and development, is often perceived as a passenger-focused operation, but with the Christmas break over, and industry back on track for the new year, there’s a new urgency to make rail freight more attractive to UK businesses.

In a statement to the Rail Freight Group, the industry association in the UK, Ed Wilson, Network Rail’s Head of Strategic Capability, with responsibility for freight, said that the agency wanted to provide a network that supports modal shift and reduces the national carbon footprint. An immediate answer to that agenda can be made by reducing delays and transit times.

“Eliminating waste is a fundamental part of any supply chain, regardless of whether this is part of managing excess inventory, defects or transportation,” he said, writing to the Group’s newsletter. “Whether rail freight forms part of the upstream or downstream chain, its role is central to the distribution of many products from steel, construction materials or deep-sea intermodal flows. It is not only about reducing cost to businesses and consumers but also about reducing the impact upon the environment and contributing to sustainability.”

Given the inevitability that freight movements will be given a lower priority than most passenger services, disruption to the passenger timetable directly affects freight reliability. With passenger operations in the UK criticised for reliability issues (and lately elsewhere, for example in Germany) Thursday’s (2 January) statement from Grant Shapps, the UK Transport Secretary, is timely. The annual passenger fares revision in the UK, has brought inevitable complaints from commuters facing higher costs and continued disruption to services.

Mr Shapps, whose governing Conservative Party have pledged wide-ranging improvements to the UK rail network, has handed notice to beleaguered passenger operator Northern Rail, after years of acute disruption to services across an area that includes major population centres such as Liverpool, Manchester and Newcastle.

It’s no coincidence that the North of England also represents a key freight operations area, and congested routes – such as the notorious Manchester Oxford Road Corridor – are an operational headache, whether the load is bulk commuters, bulk aggregates or modern intermodal containers, which some long-suffering Northern passengers look upon with envious eyes as their outdated local trains grind into the platform.

While acute pinch points such as Manchester’s city centre may prove difficult to remedy in the short term, Network Rail has readily admitted there is room for improvement overall, and embarked on a programme of works that should see tangible improvements in 2020. “We launched our velocity improvement initiative in autumn 2019,” says Ed Wilson; “With the aim of optimising the timetable for freight services to reduce transit time for time-sensitive flows and to push the turnaround of services from one circulation to two circulations per day where we can.”

While Network Rail’s ‘putting passengers first’ strapline has gone down well with consumers, it still sends out a mixed message to freight operators. However, in business to business terms, the freight acceleration initiative aims to put in place a continuous analysis of freight services, The initiative sees the continuous analysis of freight services focussed on commodity and flow in close collaboration with freight operators.

“We have packaged analysis work on an operator specific basis,” says Ed Wilson. “The first ‘package’ of work has seen an eleven per cent reduction in transit time to 13 long-distance time-sensitive freight services. In several circumstances, this was by over two hours on a nine-hour haul.”

Broadly speaking, in the past five decades, freight services have recorded a four-fold increase in average speed. While there are many factors responsible, not least the abandonment of wagon load, mixed goods services, that is an improvement that any other mode of transport or sector of industry would struggle to emulate. Further improvement calls for a forensic attention to detail, as well as step change, big ticket projects like HS2.

“We had the specific objective of optimising the service and by taking time to sufficiently analyse the timetable,” gives Ed Wilson as an example. “We altered dwell and pathing times to reduce overall transit time. The benefits reach further than just a reduction in time and therefore a reduction of unit cost.”

If today’s verdict by Grant Shapps will see Northern trains run more reliably, commuters across a swathe of Engeland will drink a toast to that. However, for freight drivers, delayed waiting for a path through Manchester’s congested corridors, the toast might be tainted by the reality that a quart measure will still not pour into a pint pot. Those big words will need to be matched by some big ticket improvements too.