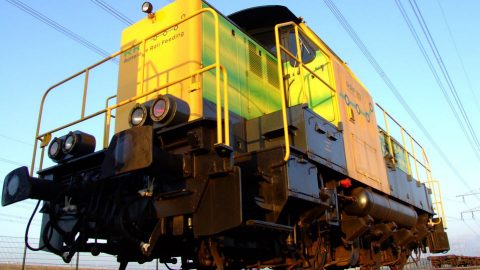 Rotterdam Rail Feeding is celebrating its 15th anniversary this year. Despite the not always favorable circumstances, the company wrote black figures all these years, according to director Arnoud de Rade. “In this sector that is already an achievement in itself, as many companies are still relying on state support to stay in business.”

The rail carrier specialised in shunting and operating freight trains on shorter distances was founded at the end of 2004 by Karel Poiesz. As a former train driver at Dutch Railways, Poiesz saw a market for new flexible services after the nationalisation of rail companies in the Netherlands. He initially realised this with a staffing agency for train drivers, Spoorflex, and later with the establishment of Rotterdam Rail Feeding (RFF), which delivered the rolling stock. Poiesz had purchased five old NS 600 diesel locomotives to start moving.

Basically, RRF was born due to the long standstill of expensive cross-border locomotives on Rotterdam railway yards. “Railway companies as Railion, ACTS and Rail4Chem, among others, were operating large, expensive locomotives that are suitable for cross-border transport. To make such a locomotive worthwhile, it must be operated as much as possible and not stand idle in a port, “explains De Rade.

“If you use a cheaper locomotive for shunting work, the expensive one can quickly return to Germany with the next train.” RRF started in October 2004 with a port booth on Maasvlakte-West, a fax, a telephone and a printer. “Business didn’t immediately take off from the start. RRF was mainly spotting customers at first, permanent assignments only started later on.”

“At the time, there was only one rail terminal on Maasvlakte-West: that of ECT. Business only took off when we started locating locs in Ede to shunt the Hupac train from Brescia. In this way we gradually got more and more permanent assignments. From 2006 we started using our first V-100 locomotives via a lease construction. We now have ten of them driving around.”

Due to the deployment of these locs, RRF was the first carrier in the Netherlands with ETCS on board. “That is why we were often asked by the Ministry of Infrastructure and Water Management to participate in all kinds of tests. Among other things for ERTMS on the Betuwe route. ”

In 2008, RRF was acquired for an amount of 21.4 million US Dollars by the American company Genesee & Wyoming Inc. This is a publicly traded company that offers the same services as RRF but in North America and a number of other countries around the world.

“The assets you need for a company like ours ensure a substantial capital requirement. Moreover, leasing is expensive. In order to be able to grow responsibly and sufficiently, we transfered the company to Genesee & Wyoming. Karel remained involved with the company until 2010 and then retired, this is when I took over. But I have been at RRF since 2006 as commercial and operational director.”

After the acquisition, the workforce has grown from 20 to the current 90 people and 25 locomotives are running around in the green-yellow colors of the company. “We have been achieving a healthy revenue increase every year since 2006 and we have always achieved positive results. Because we belong to a listed company, I cannot make any further statements about the current results. But we are in good shape with both our financial and our safety performance. ”

De Rade is also optimistic about the market developments for the coming years. Considering the ambitions for a far-reaching modal shift among governments in both the Netherlands and Germany, that is not surprising. But according to the RRF director, it is not obvious that the rail freight market will grow and that companies like RRF can benefit from it.

“Until now, only nice words were delivered the Dutch government, no money has been made available. But the plans are starting to take shape and there is now a solid package of measures to realise this ambition. The ambition is to increase the Dutch rail freight sector from 40 million tonnes of freight today to 60 million tonnes in 2030. ”

De Rade is pleased that the Dutch government has allocated money to reduce track access charges in the coming five years. Although this is a temporary measure, he sees it as a first step in the right direction. “As a rail freight sector, we are the only modality that actually pays per kilometer for the use of the infrastructure. It is very positive that governments in the Netherlands and Germany are now finally actively committed to achieving the climate goals.

“The modal shift from road to rail is an essential part of this. Rail transport is by far the cleanest transport mode. But to ensure that real investments are made, that discount on the user charge should also be guaranteed after those five years. Keeping costs low or further reducing costs is essential to make the modal shift to railk. The costs for freight transport by rail are still on the high side compared to transport by road. ”

According to De Rade, the introduction of ERTMS and the associated investments do not help reducing costs either. “The idea behind the new interoperable European security system (ERTMS) is good, of course, but the development and implementation of this system is very difficult. Locomotive owners have to incur extremely high costs, while the ultimate benefits lie primarily with the infrastructure manager, not with the carriers.

For us, ERTMS mainly means mandatory extra costs with hardly any benefits, which of course is a ‘no-brainer’ from an investment perspective. The fact that ERTMS provides more capacity because trains can follow up each other on shorter intervals is especially great for passenger trains. We benefit little from this. ”

According to De Rade, an investment of 400 to 500 million Euros is needed to convert all freight locomotives in the Netherlands. “For the time being, these costs must be partially borne by the freight carriers themselves. Unacceptable, certainly when taking into account that the conversion of all passenger equipment will be financed 100 percent by the government.

“This completely eliminates the advantage of the lower infrastructure charge for rail freight. 70 million Euros less in usage fee, but 500 million Euros in costs for the conversion of equipment is no progress. I think that the government should pay the full costs for the incorporation of ERTMS in freight equipment, if we want to realise 60 million tonnes of goods by rail in 2030. ”

An advantage could be that RRF already has ERTMS on board for a large part of its rolling stock, but because this is the current Baseline 2 version, an expensive upgrade to the future Baseline 3 will also have to take place here. At the time, RRF had a lead over other parties with this technology. This was also one of the reasons that the jubilating company was involved in the recent Automatic Train Operation (ATO) tests on the Betuwe Route, together with ProRail and Alstom.

“Innovation is our top priority. We are therefore always open to tests such as those with ProRail and Alstom. We certainly see advantages in the application of ATO. The technology is now better able than people to respond quickly to unsafe situations. It can provide a significant improvement to the track. For fully automatic shunting, we do not yet see great opportunities in the short term. It will certainly be the next step, but in a few decades. I think it is better to first focus on automatic driving on the somewhat longer distances, for example on the Betuwe route. If full automatic shunting is possible, it will become really interesting for us.”

According to De Rade, RRF, Alstom and ProRail do not yet have concrete plans for a follow-up to the tests on the Betuwe Route. “One of the reasons that ATO is now a lower priority for us is the fire prevention issue at the Waalhaven marshalling yard. This has a huge impact for us, but also for ProRail.

Due to the restriction on trains with hazardous substances, we have not been able to go there for months. Certainly now that the recent extinguishing test has failed, we expect that it will take at least the entire month of November before we can operate and shunt again at the Waalhaven. We really hope that the next test will go well.”

Show must go on

We are now doing the same work with twice as many people and resources, De Rade observes. “We cannot currently connect and disconnect locomotives at the Waalhaven, so that must now all be done at the emplacement of Kijfhoek. All international trains with destination RSC Waalhaven now go first to Kijfhoek. There, the electric locomotives are disconnected from the trains and subsequently driven to the Waalhaven with diesel locomotives. That is an extra 15-kilometer. And it means an additional decoupling point. There are extra actions for everyone. Both for the carrier and for rail traffic control. We would have liked to deploy those people and resources to move in the direction of those 60 million tonnes of goods.”

RRF does not yet transfer the resulting additional costs to its customer. “Not in principle, no. We are still discussing compensation with ProRail. But we don’t bother our customers with this, neither with the festivities around the fifteen-year anniversary of RRF. We are going to make a nice trip with the staff, but the work can certainly not paused, because the show must go on!”