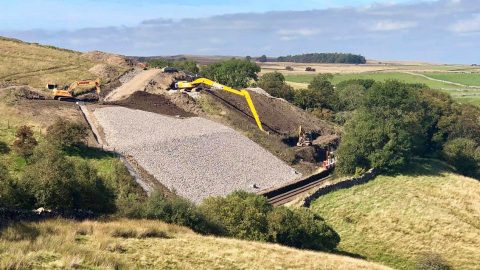 A steep railway cutting that was edging slowly towards the Settle-Carlisle railway line in Northern England has been strengthened by infrastructure manager Network Rail. The company invested 1.2 million UK pounds to make sure that the line between Leeds, Settle and Carlisle remains safe and reliable for train traffic.

The upgrade, at Fothergill, near Kirby Stephen, is being delivered as part of the Great North Rail Project. To help stabilise the slope, engineers dug out waterlogged soil and laid 11,500 tonnes of rock. A new drainage system was also installed to better manage water levels following heavy rain.

The work to stabilise the slope involved the excavation of soil that had been weakened by surface water from the surrounding area. Once removed, engineers then made the cutting more shallow and stable using large amounts of rock. A series of drainage pipes and catch pits were then laid to divert water away, making this section of the line more resilient to heavy rainfall.

The work at Fothergill was completed by Network Rail’s Cumbrian-based contractor, Story Contracting. The site is next to the Birkett Tunnel and trains continued to run without disruption. The Great North Rail Project is a vast programme of improvements to transform train travel in the North of England. By 2022, it will have delivered a multi-billion pound package of improvements.

No shunting dangerous goods at yard in Rotterdam for now

Moment of truth for shunting yard Rotterdam: is it fire proof? 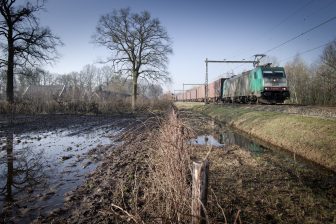 Column: Follow the Germans to be an important rail theme in 2020