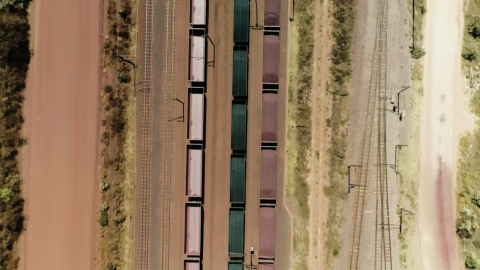 A new record has been set in the category ‘freight train with the largest number of wagons’. The South African railway company Transnet SOC Limited broke its own and world record with the launch of a 375-wagon manganese train on Thursday 24 October.

The train is four kilometers long and runs over a distance of around 861 kilometres, from Sishen to Saldanha in South Africa. The wagons were increased from 312 to 375 wagons, increasing manganese volume from 19 656 tons to 23 625 tons per train. The previous record of this kind was an iron ore freight train carrying 342 wagons, also operated by Transnet.

The extra long train was a direct response to the rapidly increasing volumes of manganese export. Transnet’s share of this export surged exponentially from 5 million tonnes in 2012-2013 to a record-breaking 15.1 million tonnes in 2018-2019. This growth led to the signing of the Manganese Export Capacity Allocation agreements, the last of which was signed in September this year.

Transnet (TFR) has signed take-or-pay agreements with ten manganese exporters in the country. This should maximise the manganese volumes by optimising the use of existing assets, locomotives and wagons, within the installed infrastructure constraints. According to Transnet, it aims to do more with what is currently available.

TFR General Manager for the Iron Ore and Manganese Business Unit, Russell Baatjies, explained that there was an option of increasing manganese’s rail capacity to respond to customer demand by upgrading the existing railway feeder lines and build new rolling stock. However, that would have cost the company significant capital, he explained.

By applying innovative solutions, the same objective could be reached at minimum cost. “Applying distributed power technology to increase the train length to 375 wagons will reduce capital requirements by over 90 per cent of the initial estimate”. Running the train did mean that rolling stock, as well as some infrastructure, needed to be upgraded to 30 tonnes per axle on the section between Hotazel and Sishen.

TFR General Manager, Mr. Brian Monakali who is also the former Chairman of International Heavy Haul Association added: “This is another breakthrough for the heavy haul railway industry. Rio Tinto, Australia, recently started with the implementation of driverless trains in their iron Ooe railway system. Transnet has now successfully operationalised the 375 wagon train.

“The collaboration on technical research and sharing of best practice by heavy haul operations worldwide will surely keep pushing the operations, safety and rail capacity envelope to new levels through application of breakthrough technology”, he concluded.

Operationally, that’s astonishing. Enviromenatlly, that’s over 400 road lorry-loads, and that’s the real story here. Whether in one train or several, the railway has virtually unlimited capacity to reduce the environmental impact of industrial activity. Thsi will be so important in 21st century Africa.