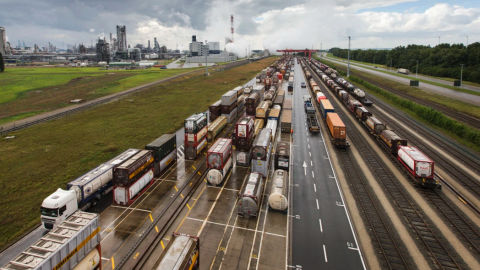 A new container terminal will be constructed in the Mošnov, a strategic industrial zone near Ostrava in Czech Republic. Amongst others, the new terminal will link the Moravian-Silesian Region with one of Europe’s largest ports Antwerp. A new branch of the Studénka-Veřovice railway line will be built to connect directly to the North Sea-Baltic corridor. The terminal is expected to be operative in early 2022.

This was agreed upon by the Moravian-Silesian Region, Statutory City of Ostrava, the Railway Administration Authority (SŽDC), Concens Investments and Antwerp Port Authority on Thursday 18 September. The partners have signed a Memorandum of Understanding to start this new project, which is called the Mosnov Multimodal Transport Terminal.

According to the Governor of the Moravian-Silesian Region, Ivo Vondrák, a study was compiled of the new branch and its connection to the combined transport terminal and Leoš Janáček Airport Ostrava. “Thanks to this study, the construction was included in the investment plan of the Railway administration Authority. At present, work is underway on project preparations. This branch is crucial for the railway connection of the new terminal”, he stressed.

“The strengthening of commercial links with the port of Antwerp and the completion of the cargo terminal logistics complex at Mošnov will certainly bring substantial economic benefits, including an influx of new investment not only to Ostrava, but to the entire Moravian-Silesian Region”, he added.

“Because environmental improvements rank among the city’s top priorities, we also welcome the related plans to increase railway infrastructure capacity; this will enable a significant volume of goods transport to be transferred from the road network to the railway. So for local companies this will bring major economic benefits, and for the region it will mean substantially lower emissions from road freight transport”, said Ostrava Mayor Tomáš Macura.

The investor in the project is Consens Investments (parent company of Ostrava Airport Multimodal Park s.r.o.). In preparing and implementing the project, it will use a subsidy from the Operational Programme – Transportation from the Czech Ministry of Transportation.