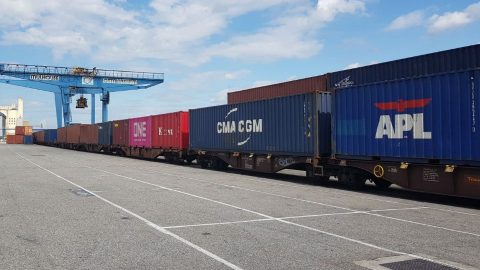 New service between Rotterdam and Ottmarsheim

Dutch operator Multi Modal Rail has launched a new container rail service between Rotterdam and the French town of Ottmarsheim. Starting with one round trip per week, the shuttle connection is expected to expand to two round trips per week soon. The train calls on each of Rotterdam’s major terminals.

After being loaded in Rotterdam on Thursday, the shuttle departs from the sea port on Friday and arrives/departs in Ottmarsheim on Saturday. The train is back at Maasvlakte for unloading on Sunday morning. The shuttle service is offered as a complement to the two existing container rail services between Rotterdam and Strasbourg.

Multi Modal Rail (MMR) maintains three scheduled services per week between Rotterdam and the Alsace/Haut-Rhin region. “It is a fine addition to our existing connections with the region – basically, everything south of Colmar can be served more effectively via Ottmarsheim”, says MMR’s General Manager Benjamin Hottier.

MMR will be sourcing its trains from Logistic Intermodal Service B.V. (LIS). LIS promotes freight transport via rail and makes its trains available to other multimodal operators and/or conventional carriers.