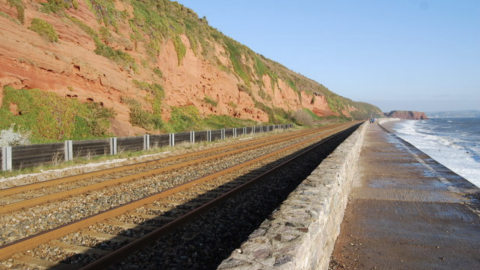 For over a century, UK’s Severn Tunnel has been both the engineering marvel and operational nightmare of the arrow-straight line that connects London with Cardiff, the capital of Wales, and Bristol, the one-time capital of the British Empire’s maritime trade. A spring, as forceful as the famed tidal bore that rushes up the river, has required constant pumping to keep rail operations from sinking into a watery abyss.

Water water everywhere. Will a watery nineteenth century problem sink a twenty-first century electric railway in South West England? Plans to electrify the Great Western Railway line between Cardiff and Swansea were scrapped two years ago. With all the forlorn effort of King Canute, not even the great Isambard Kingdom Brunel could turn back the tide. Even today, it is water that threatens to drown his Great Western Railway as it dives beneath England’s longest river.

Now it seems that the waters, known simply as the Great Spring, which may be from the same source as the nearby Bath spa, will permanently dampen this spirited project, which is as ambitious as anything Brunel proposed for the railway. The expensive and much delayed electrification programme, has run into a corrosive problem. The damp atmosphere of the 5km tunnel, has proved too corrosive for sensitive earth wiring, and forced the project to stall on the English side of the river.

Network Rail, the UK’s infrastructure body, is facing a rethink on a flagship project while the pumping operations continue, as they have done since the tunnel opened in 1886. With understatement that epitomises the British, the Government’s Department for Transport has said it is ‘aware’ of the issue – though it’s hard to be otherwise with a daily requirement to pump 60m litres from the tunnel, just to keep the tracks from flooding.

Speaking to British media, Network Rail’s chief operating officer Alison Thompson was more willing to commit. She said she was confident the first electric train will run between Cardiff and London early in 2020 – after construction and testing takes place this autumn and over Christmas and New Year.

Recently delivered Hitachi bi-mode trains, with diesel engines only designed to deliver services in the far west of Wales and England, where wires are not planned and line speeds are lower, are now being re-rostered to cover much longer distances with their pantographs lowered. The diesel engines will be thundering along through Wales and the West of England, while a long-term solution is found.

The network in the west of England, built originally by the Great Western company, under the technical direction of Brunel, has had many notable civil entering feats in its history. Although designed to a non-conformist ‘broad gauge’ in its early years, the entire network was famously re-engineered to 1435mm standard gauge over the course of a weekend. It seems the electrification of the Great Western Railway may take rather longer, if the problem that stumped even Brunel has any say in the matter.