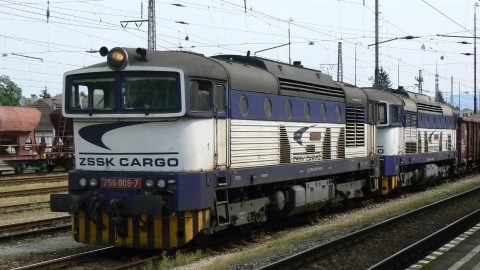 After nearly ten years the state-owned rail company of Slovakia, ZSSK CARGO, has been fined for what was condemned as ‘anti-competitive behaviour’ in the period 2005-2010. In these years, the company refused to sell or lease surplus electric locomotives to other parties. However, the penalties for this are considered too low.

This was said by ERFA, the European Rail Freight Association that represents the European rail market. The penalties for such unacceptable attitude are too low and delays too long”, the organisation said. It is writing to the Directorate General for Competition at the European Commission, asking them to review competition processes in Slovakia.

Between 2005 and 2010, ZSCS refused to sell or lease surplus electric locomotives and refused to provide fuelling services to other operators. The Antimonopoly Office of the Slovak Republic (AMO SR) considered this an abuse of a dominant position within the meaning of article 102 of the Treaty on the Functioning of the European Union. It concluded that the conduct must be sanctioned. This was in 2012.

On 19 July 2019, seven years later, AMO SR confirmed its position. However, it imposed a sanction of nearly 3 million Euros, rather than the initially proposed 10 million Euros. The original decision had been annulled by the Regional Court in Bratislava and the Supreme Court of the Slovak Republic. In the current decision, the Office took into account the comments of the courts, explained ERFA. The decision has not come into force yet.

ERFA considers the fine too low and is frustrated over the long delay in penalising the misconduct. “It required the Slovakian authorities ten years to penalise, and only with a small sanction, the state rail freight monopoly for abuse of a dominant position. It is totally unacceptable for any new operator to have to wait ten years for the resolution of what the competition authority clearly believes is anti-competitive behaviour”, the company writes.

Carole Coune, ERFA’s Acting Secretary General adds: “The future of the climate also depends on the audacity of the judges. For the development of a healthy market in second hand rolling stock of all types, as there is for air and road vehicles, competition authorities and judges must play their role. This is to investigate and condemn severely the refusal to supply as abuse of a dominant position in the meaning of article 102 of the Treaty.”