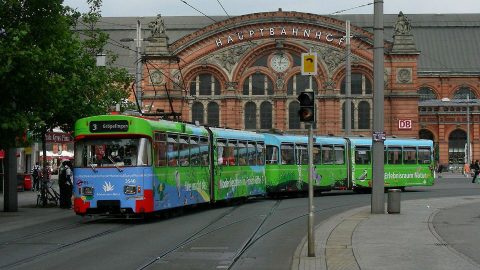 Tram for freight transport in Bremen

In the German town of Bremen a concept is being studied to transport freight by tram. It concerns the transport of freight within the city, something which has been done in Germany in the past. Maike Schäfer (Greens), the new alderman for environmental affairs in Bremen, must investigate the possibility.

This was revealed by the German Christian trade union CGB. According to this organisation, good experiences with city distribution of cargo have already been gained in the past. For example, in the city of Hanover the concept was applied for decades. More money was earned from tram transport of goods than from transport of travelers, says the CGB.

In Dresden, a similar project has been up and running since 2000, when the CargoTram was launched for the specific purpose of delivering car parts for Volkswagen. The tram shuttles between the logistics center of the company to its factory over an existing light rail network used for passenger trams. However, the trams have been constructed as the project commenced and designed for the delivery of Volkswagen cargo.

Enthusiasm for the alternative freight transport is especially evident in European cities where light rail infrastructure already exists. Over the years, the concept has been studied and tested in cities such as Zurich, Amsterdam and London. The advantages considered are mostly a relief of traffic on the road and environmental benefits. However, as an example in Amsterdam shows, financing can pose a challenge with no clear consensus among the parties involved.