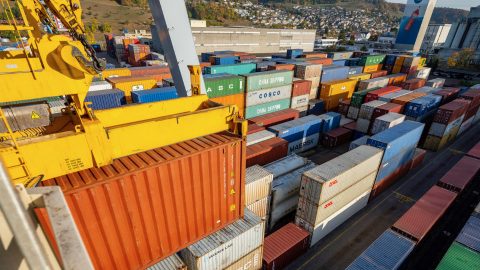 Schweizerzug offers direct connection from Switzerland to Port of Rotterdam

Schweizerzug has launched a direct, two-way railway service from the Swiss hubs of Frenkendorf (near Basel) and Niederglatt (near Zurich) to the Port of Rotterdam. The service calls on the APM Terminals and Rotterdam World Gateway (RTM) at Maasvlakte II.

The railway carrier already connected the Swiss towns to the Port of Rotterdam, but via the German hub of Neuss. To the port of Antwerp it did operate a direct connection. It has now decided to provide this direct connection to the Dutch port as well.

CEO Roman Mayer commented: “Both Niederglatt/Zurich and Frenkendorf/Basel benefit from direct and therefore faster links to Rotterdam. We are covering Switzerland’s most important economic regions – with the same price for both locations. Zurich and the eastern part of Switzerland especially may find this new service attractive.”

Schweizerzug is specialised in the railway connection between the Swiss hubs and the largest seaports of Europe. In January and February of this year, the company increased its departure frequencies between Frenkendorf and Niederglatt to the Port of Antwerp. The updated schedule can be found here.