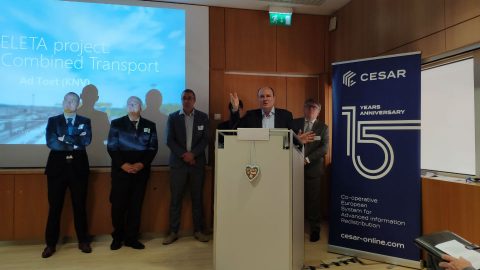 ‘Train delays may not be reduced, but will be better reported’

The rail sector is well represented at the Transport & Logistic exhibition that is taking place in Munich this week. Given the quantity and size of the stands, rail transport is clearly a growing market. Many companies capitalise on the success of the New Silk Road and offer numerous logistics products in this field.

A separate meeting was held during the exhibition about the progress of the ELETA project. This project focuses on improving information about the expected time of arrival (ETA) of freight trains. In the last two years, experiments have been carried out, mainly on the Rhine Alpine corridor. This most frequented rail freight corridor of Europe witnessed almost a million minutes of delayed freight trains per month in 2018.

Providing ETA data is not new in the sector, but the quality of the data is not sufficient. Most forecasts are based on time shifting; for example, if a train is delayed by 15 minutes, the forecast for the continuous train ride is a 15-minute delay. This method is not very accurate, but until now there were no better alternatives.

The ELETA project aims to calculate more precise data by using algorithms. With the help of the TIS platform, where all information is collected, the sector can draw on the experiences of previous train journeys and delays from the past. Artificial Intelligence does the rest. As the amount of data increases, the accuracy of the ETA data also increases.

Disruptions are the standard

What became especially clear during the meeting is that this will not reduce the delays of trains. It will be possible to report the delays more accurately, explained Marian Pufahl, CEO of Synfioo. The company is partly responsible for the software development of the ELETA project.

“It is a world full of disruptions, that is a fact and the starting point. Strikes, staff shortages, technical problems and congestion, these are just a few causes that can cause delays. Because the causes are so diverse, you must ensure that you collect as much data as possible to properly predict the delay. Some involved parties report disruptions via Twitter, this is also a data source that can be used. The point is that all data is loaded automatically, there are no hands involved.”

Train delays on the Rhine Alpine corridor totalled around 900,000 minutes per month on average in 2018. This comes down to 15 thousand hours, adding up traffic in both directions. Trains moving from south to north witnessed more delays than in the other direction, and the months of October and November witnessed a peak in both directions; southbound seeing 626 and 629 thousand minutes of delay, and northbound 563 and 608 thousand minutes respectively. This is according to data from RailNetEurope (RNE).

According to the statistics, the main reasons of delay stem from the actual train carriage, impacted by scheduled infrastructure works, a lack of locomotive drivers, first or last mile problems or the delay of a previous corresponding train. However, delays could also arise from technical problems, terminal issues or force majeure.

“Even if you are not reliable, it is important to be transparent,” said Pier Eringa, CEO of the Dutch infrastructuremanager ProRail during the meeting. “In the Netherlands, the rail freight sector is not performing well. Congestion is a major problem and the emphasis is always on passenger transport. But it is important to keep improving. If the sector wants to compete with road transport, the result will have to deliver. ”

If not the punctuality of the sector, the improved ETA figures are at least to improve the reliability of rail freight transport. In recent years, almost all railway companies and terminals involved have signed the TIS user agreement. This was crucial for the implementation of the project. TIS is the platform where data is inserted, combined and calculated.

Five intermodal carriers have started to link information about the ETAs of the train journey to their messages about the subsequent road transport. These are Hupac, Kombiverkehr, Mercitalia, Rail Cargo Operator and Lineas. The projects include terminals in the Netherlands, Belgium, Germany, Switzerland, France, Austria and Italy. Twelve intermodal trains are now sharing their ETA figures on this basis, most of them on the Rhine Alpine Corridor.