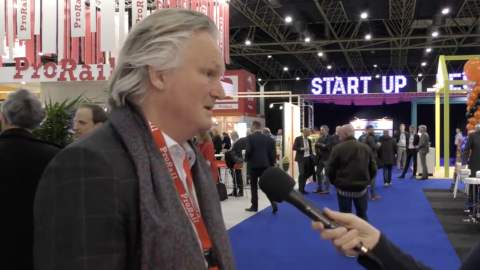 Pier Eringa: capacity for freight should be more flexible

There is too much capacity wasted on the congested Dutch railway network. This concluded Pier Eringa, CEO of infrastructure manager ProRail at RailTech Europe 2019. “These train paths are requested, and then cancelled on short notice. Then, they are not used.”

Eringa responded to the question if the capacity for freight was sufficient. Freight operators argue that the priority is mostly for passenger traffic, not allowing the rail freight sector to reach its full potential. “Yes, there is a lot of priority for passenger traffic, but capacity should also be used more flexibly. Cancelled train paths could also be used. Requests should not just be made long in advance.”

Eringa is not alone in his concern. RailNetEurope has looked into the matter as well. “An important shortcoming of the current international timetabling procedure is the unavailability of capacity requested on short-notice, said Philipp Koiser, sales and timetabling manager at RNE earlier. “Right now, railway undertakings are bound to require a train path eight months in advance of the timetable change. When they request a train path on short notice, they rely on the availability of residual capacity, which is often very scarce.”

A solution according to RailNetEurope is a new request method called the rolling planning request. “This is based on safeguarded capacity, which is dedicated to later requests and which is assigned to this purpose in the capacity model. This should enable railway undertakings to request paths at any time and still get high quality paths. “Quick response times and multi-annual request validity should provide the flexibility necessary in order to react to the volatile market, while at the same time still providing stability for upcoming timetable periods”, explained Koiser.

Eringa said that ProRail certainly sees a role for itself in improving the situation, partly by offering more flexible capacity, but also by experimenting with Automated Train Operations (ATO). “This technology should enable more train journeys on the existing network, as they can follow up each other much faster.”

He emphasised that freight should not be ignored when discussing rail. “The conditions for freight are the same as for passengers: the sector is also looking for attractive pricing, efficiency and simplicity in cross-border traffic. Rail freight should be made much simpler. This can be done by harmonisation measures such as ERTMS”, he added.