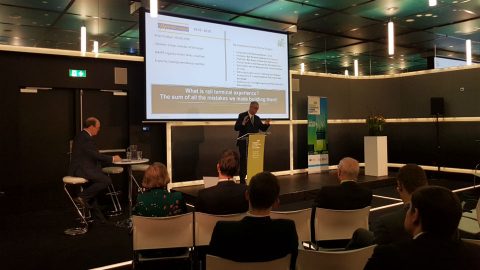 On 26, 27, and 28 March the Freight and Terminal Forum is taking place in Utrecht, the Netherlands. This is the live blog, with news updates, videos and interviews of this first freight edition of the RailTech. On day 3 (28 March), the conference about terminal efficiency takes place. In addition, various workshops are organised.

15.10: Harald Jony present the trimodal terminal of Wiencont in Vienna. Also this terminal is dealing with delays. “Last week, we had 4,629 minutes of delayed trains”, he said. “But we do management by chaos. Only then you can be flexible.” The full story can be read here.

14.45: Nils Kemme of Hamburg Port Consultancy takes us through the landscape of terminal automation. “Rail terminal automation is not yet really established in Europe”, he said. But in the next 5 to 10 years, he expects to see several inland terminals with automated processes. Kemme showed some best-practice examples of terminals in the US. An interview with Kemme can be read here.

14.30: The port of Antwerp developed a digital solution for railway traffic at the port. An Cant presents this solution. The Rail Traffic System (RTS) is a web application used primarily to plan and monitor trains. Railway undertakings can reserve a terminal slot via RTS, said An Cant. A full interview can be found here.

14.15: Arno Larooij introduces Ontrack, a digital solution to manage railway traffic at the Port of Rotterdam. It was known first as HaROLD. The system integrates various applications in one solution to increase the efficiency of railway traffic at the sea port. “But we do not want to keep this for ourself. We want to share the information with others as well.” Read more here.

13.50: Rob Spierings, Strategic Business Development Manager at Bentheimer Eisenbahn AG, talks about the market needs for a terminal. The market needs facilitations for 740-metre trains, he says. According to a German study, the cost-benefit ratio of facilitating this length of train is 4.8, meaning that with every euro spent, a benefit of 4.8 Euros results. Eisenbahn is the operator of Twinport Bentheim Coevorden, which has enabled the handling of 740-metre trains. Here you can read an interview.

13.30: Jarno Kuipers from Kalmar takes the stage. He talks about the design phase of a terminal, which should start at least 5 years in advance, he claims. “Take into account different parametres, test it over and over again and use the technologies available”, he advises.

12.00: A panel discussion about the cost of delays starts now, with Alessandro Valenti of Hupac, Harald Jony of Wiencont and Erik Regter of Rail Cargo Group.

11.35: Another ProRail speaker, Floris Visser, talks about data exchange from the infrastructure manager point of view. “The challenge is that there are many different parties involved. This leads to missing data, which in turn leads to longer lead times and higher costs.”

He stresses that ProRail is taking the lead in European initiatives such as TAF TSI and Timetabling Redesign. These initiatives should lead to a more international and extensive level of data sharing.

11.15: Ad Toet takes the stage. He talks about ELETA, a system to improve the accuracy of the estimated time of arrival (ETA). The project brings about a change in the method of calculation of ETA, which is now done lineairy. Instead, it will be done with artificial intelligence. The aim is not to divert more than half an hour of the actual arrival time. Read more here.

10.15: The first panel discussion takes off, about shaping terminal policy. Pardoel shares his plans regarding the connection to China via the Caspian Sea. “We are working every day on this, but the starting date of a regular service is not yet clear.” However, he can tell that 18 to 19 units transported on trial have now proven to be profitable.

9.50: Reinhard Haller from the European Commission takes the stage. He talks about the role of the commission in developing efficient terminals. “Of the projects proposed for EU funding in 2019, there were 20 projects related to terminals. A total of 106 million Euros was recommended.” The final decision about the proposals will be taken in April.

He noted that there is no such thing as a single EU terminal strategy. However, it is an important element in its multimodal policy.

9.25: Peter Pardoel, Board Member of Cabooter Group from the Netherlands takes the stage. He provides the keynote speech, based on his experience building terminals in Venlo. “A terminal should be completely integrated in the logistics chain”, he said.

9.10: John Voppen of Dutch infrastructure manager Prorail talks about sharing data. “In the end, the sector does not need ProRail anymore”, he said. Sharing data is needed to make sure that scare capacity is used efficiently. “Every time a train misses a slot, we miss out on capacity.”