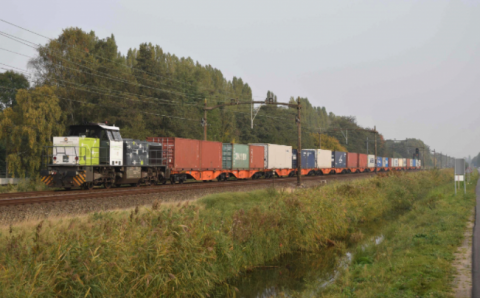 The frequency of the Dutch rail shuttle between the port of Rotterdam and the Euroterminal in Coevorden has been increased to three times a week in both directions. The aim is to have the train run daily in the future. That is what the Port of Rotterdam Authority reports, citing a growing demand for the freight line.

Coevorden is an important hub for rail freight transport between the Netherlands and Germany. The municipality of Drenthe has a direct connection to both the German and Dutch railways. Coevorden has train connections with 21 European economic centers. The Euroterminal Emmen-Coevorden-Hardenberg, founded in 1993, is owned by Bentheimer Eisenbahn AG. Every year about 375 thousand tonnes of goods are transferred here. That corresponds to 25 to 35 thousand trucks.

The rail shuttle carries 95 TEUs at a time and departs from Coevorden on Tuesday evening, Thursday evening and Saturday morning. The train travels through the Kijfhoek marshalling yard and calls on four terminals in Rotterdam. On Wednesday, Friday and Sunday, the train returns to the Euroterminal from the port of Rotterdam.

Joachim Berends, director of the Euroterminal and Bentheimer Eisenbahn AG, sees the popularity of the rail shuttle increase. Carriers and distributors are increasingly opting for rail transport because they want to reduce their CO2 emissions. “We aim to have the rail shuttle run on a daily basis in the future”, he says on the website of the Port Authority.

Companies that use the shuttle between Coevorden and Rotterdam include logistics service provider Graaco, TSR / Holland Maxeda, an import and export company of non-food items, and potato producer Emsland Group. Since 2007, the latter company uses almost every train that travels from Coevorden to Rotterdam for the transport of its products.

“This was already about 2,500 containers this year. A third trip per week gives us more flexibility. Because we can almost cover the entire distance by rail, the rail shuttle is also a financially more attractive option for us “, says logistics manager Herbert Zwartscholten of Emsland Group against the Port Authority.