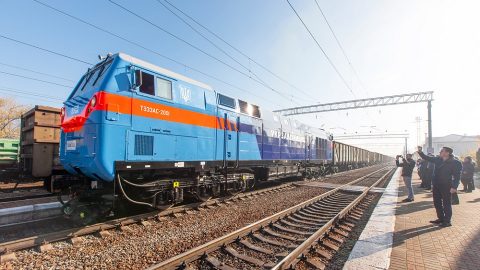 Ukrainian Railways has entered into service the first US-made TE33A Trident freight diesel locomotive. The railway company has already received eight units of this type and expects the delivery of another twelve units by the year’s end. Currently, the locomotives are in the final stage of assembly at the facilities of Ukrainian rolling stock manufacturer Kryukov Railway Car Building Works.

The TE33A locomotive made its first regular trip from Melitopol to Mariupol on 13 December by delivering 3,824 tonnes of iron ore to the two metallurgical giants Azovstal and Illich Iron & Steel Works. The vehicle demonstrated excellent results during the first trip. “The new locomotive runs, for example, the Komysh-Zaria – Fedorivka route and backwards in an average of 3 to 3.5 hours, while other diesel locomotives run this route in 4.5 hours”, the acting CEO of Ukrainian Railways Yevhen Kravtsov said.

According to him, the railway company intends to increase the weight of freight trains on the mentioned section. He did not specify the new figure, however, the locomotive pulled a 4,500-tonnes set of freight wagons during the trial rides.

Trident locomotives will be based and served at the depots of Melitopol and Mykolaiv. The choice of these facilities was determined due to its proximity to non-electrified lines. The Melitopol depot is located close to the Fedorivka – Komysh-Zaria – Volnovakha section that is crucial for the supply chains of Azovstal and Illich Iron & Steel Works. “If we could handle no more than twelve to fourteen freight trains towards Mariupol last year, today we are confident that after the launch of the General Electric locomotives we can consistently handle 22 to 24 trains”, noted the chairman of Ukrainian Railways.

Meanwhile, the Mykolaiv depot is situated on the non-electrified Dolynska-Mykolaiv line, which is the important one for the seaports of Mykolaiv and Olvia. The electrification of the 148-kilometre route will start in March 2019. The works are expected to last until 2023.

As for today, Ukrainian Railways has got only eight TE33A locomotives. Another seven units will make their first regular trips in near future. By the end of the year, the railway company intends to increase the number to twenty units. These locomotives have already been delivered to Ukraine from the GE Transportation facility in Erie, Pennsylvania. The Kryukov Railway Car Building Works (KRCBW) is responsible for their colouring and final assembling. Ten locomotives will be shipped to Ukraine next year. Ukrainian Railways plans to enter into service thirty TE33A units until next spring. The total order includes the delivery of 225 locomotives by 2034.