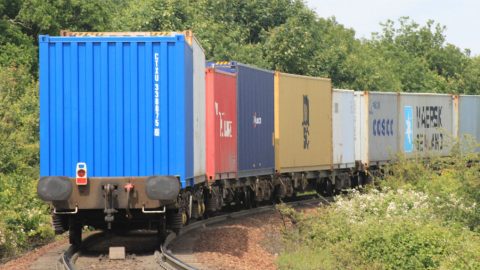 Network Rail engineers have installed 2,300 sleepers along with ballast, the stones that form the track bed, in preparation of the construction of an additional line on the Felixstowe branche, the vital railway line connecting the Port of Felixstowe to the UK hinterland. In the coming months engineers will start building the new line, which connects Trimley and the level crossing at Gun Lane.

A 1.4 kilometer track loop near Trimley Station will allow the line to operate more effectively, giving the flexibility to run an additional ten freight trains in each direction, as well as improve the reliability of existing passenger services. With the new line, a total of 43 trains will be able to pass each day, the equivalent of up to 76 lorries on the road.

Guy Bates, head of freight development at Network Rail said: “We are now a matter of months from being able to realise the benefits of the Felixstowe capacity enhancement scheme, it will provide line capacity for more trains conveying more goods by rail and so fewer lorries on the road – this scheme is a critical step in developing rail capacity between the UK’s number one Port and the Midlands and the North.

“It is part of our wider Strategic Freight Network programme that over the past decade has laid the foundations for a progressive realisation of a set of freight capable corridors linking the nations key ports, centres of production, distribution and consumption – enabling rail freight to play an increasingly effective role in delivering for the UK economy and environment.”

Increased capacity on the Felixstowe branche is a much-needed infrastructural upgrade, as currently many containers go to Felixstowe by road. “There is not enough track capacity for both the lightly-loaded passenger trains and the container trains, and so it’s the passenger trains that get the line capacity”, explained rail economics expert Professor Chris Nash. ““Here we have investment going on now to enable freight to expand, so it is not all gloomy.”

In addition to the track re-doubling, works will include the upgrade of several level crossings to make them safer and new bi-directional signalling infrastructure to support the demand for more freight trains. The works are carried out at a cost of 60.4 million British pound (52.7 million Euros).

Yet they will NOT double the line between Ely and Soham!Without one the other is pointless!