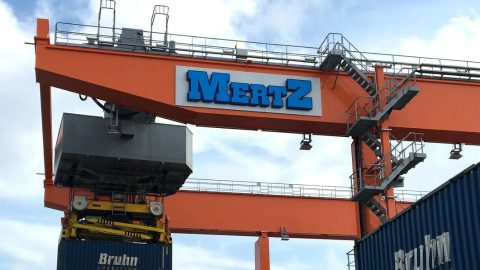 German rail operator Kombiverkehr has increased its rail services to and from Sweden via the Öresund bridge. Since this week, three trains offer five departures in both directions on the line Coevorden – Bad Bentheim – Malmö.

Since 3 September this year, there are three rather than the previous two shuttle trains running directly between Coevorden in the Netherlands or Bad Bentheim in Germany and the Mertz terminal in Malmö. In a next step, the company will increase the frequency of the services.

Moreover, the direct train between Lübeck and Stockholm, which also crosses the Öresund bridge, will become available to other forwarders and logistics companies as a regular timetabled service. Up till last week, Kombiverkehr operated the service exclusively as a ‘company train’ for a forwarder specialising in commercial logistics.

“We expect to see demand for intermodal solutions in northern European transport continue to climb this year, having already posted record results in this segment last year. The changes that we have now made to our own network via the fixed link are therefore just the logical consequence of this growth trend”, emphasised Peter Dannewitz, Head of Sales at the Frankfurt-based company.

With the implementation of both measures, Kombiverkehr is increasing the number of international direct trains serving northern Europe to 56 trains a week, a significant part of its euNETdirekt+ network. The operator offers further services to and from northern Europe via the Baltic Sea ports of Kiel, Lübeck and Rostock, efficiently integrating them into the national and international networks by optimising timetables between ferry and rail.