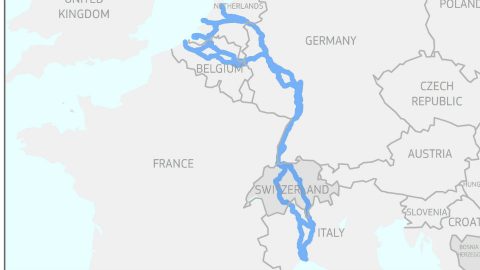 International freight traffic by rail to and from Genoa is currently operational and not affected by the collapse of the Morandi bridge. Train traffic via the Submarine Line is halted, affecting the movement of freight along the coast of Genoa.

Italian railway undertaking Ferrovie dello Stato Italiane (RFI) carried out inspections on the Submarine Line to assess which restoration operations are required on the damaged infrastructure, it commented. “RFI has already made arrangements with the contractors that will carry out the works. They will start as soon as the permit is issued by the Italian authorities.

The Submarine Line is used for freight traffic between the Marittima and Sampierdarena station. According to RFI, there are alternative routes to transport freight to some destinations across Italy. According to Italian media outlet Città della Spezia, the Bastioni Line is also affected by the collapse of the Morandi bridge. This station is used for passenger and freight traffic between Sampierdarena station and Ovada, Milan and Turin, the report reads.

According to RFI, long-haul rail freight traffic is only managed by the Voltri Mare station, which operates as usual. Here, trains depart towards the north, west and east of Italy. It is also the rail freight terminal on the Rhine-Alpine corridor, one of the European core network corridors connecting Rotterdam in the Netherlands with the Italian port of Genoa.

On 14 August the Morandi bridge in Genoa collapsed. The bridge used to run across the Polcevera stream and was part of the A10 toll motorway, connecting the districts of Sampierdarena and Cornigliano. Due to the collapse, at least 43 people died. The railway lines under the bridge were crushed and left unoperational.