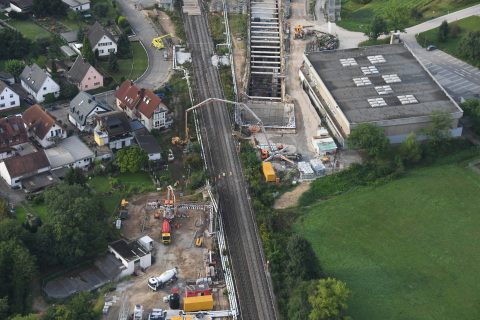 Digging for answers in Rastatt Tunnel

Nearly a year after a landslip at the now infamous Rastatt Tunnel paralysed European rail freight traffic, the soil at the site is investigated to analyse what went wrong. Joint venture (ARGE) Tunnel and Deutsche Bahn are currently carrying out a drilling programme for an in-depth exploration of the subsoil.

The drilling started mid-May and will continue until the end of July. During this period, sixty holes are made, some of which are 25 metres deep. The activities take place in the area of ​​the damaged site and in its surroundings. The drilling of one hole takes about a day. At the end of the project, the findings should provide further information about the causes of the accident.

On 12 August 2017, a landslip occured at the construction site of the new 4.27 kilometre tunnel being built at Rastatt. The movement destabilised the construction site and the existing railway, which led to a disruption of railway services between Karlsruhe and Basel. This disruption continued until 7 October and resulted in economic damage of more than two billion Euros for the industry.

In order to restore services, a 120-metres long, one metre thick concrete slab was installed to stabilise the ground, provide structural support for the loads above and serve as the foundation for the new tracks. The project had suffered serious delays, but until now no clarity has been given about a new timeframe. “Results and further consequences for the project schedule may be presented mid-2018”, was written in the annual report of the Rhine-Alpine Corridor 2017.

Today, further work is carried out in the concrete, pipe-filled part of the eastern tube. Since last week, concrete is being removed over a length of six metres, allowing for an opening through the tunnel ceiling. This opening serves as an escape route from the tunnel tube as well as for the logistic supply of the further construction work, the German site Ka-news reported. The work is expected to continue until the end of July 2018, according to the site.

Rastatt Tunnel provides only one link on a wider stretch of upgraded railway between Karlsruhe and Basel. The new line will include four continuous tracks and its operational efficiency will be increased. While several sections have been opened, others are still under construction or in the design phase. Most important are the Offenburg Tunnel (preliminary design expected mid-2018), the Katzenberg Tunnel (construction to start soon) and a western bypass of Freiburg for freight (under study).