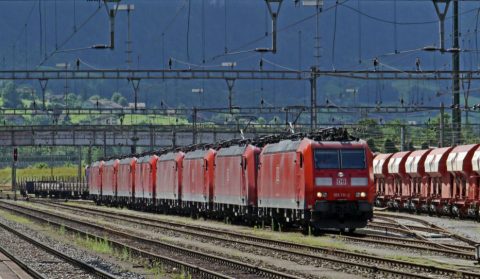 A flat rate for transalpine intermodal trains could cover the Swiss subsidy gap, suggested Hupac at its Annual Event in Zurich on 1 June. Swiss subsidies for combined transport on this corridor will be phased out starting 2024. A substantial lowering of track access charges could compensate for the lack of funds at that time.

This was the argument of Hupac’s president Hans-Jörg Bertschi, who was speaking at the event. The current very high track access prices for Swiss transit must be reduced to the level of the corridor countries, a “simple, non-discriminatory support measure that would send an immediate signal in favour of modal shift”, he said. The flat rate could be the equivalent of three Euros per train kilometre, he suggested, basing this estimate on a comparison with track access charges for freight trains in Germany and Italy.

It is expected that approximately two thirds of current government subsidies for intermodal transportation can be reduced by improvements in productivity with the opening of the Ceneri Base Tunnels and clearance of the 4-meter corridor, projects that are to be completed in 2020. Together with the infrastructure upgrading in Germany and Italy, the production parameters for intermodal should improve significantly.

As explained by Nicolas Perrin, CEO of SBB Cargo, a higher train weight of up to 1800 tonnes allows 13 per cent more capacity. Longer trains of 740 metre add another 23 per cent capacity. The 4-metre corridor via Gotthard extends the market by 50 per cent and the ETCS digitalszation project enables a higher frequency of trains, leading to a 20 per cent capacity increase. Finally, increased average speed of trains from 50 to 75 kilometre per hour will add another 50 per cent of capacity, Perrin outlines.

Despite these impressive prospects for the post 2020 Transalpine line, one third of current subsidies would still have to be granted under the current circumstances, Hupac believes. “In 2019, Germany will reduce the track access charges by up to 50 per cent for a period of five years, allowing railway undertakings to invest and to improve competitiveness. Incentives are in place in Italy and under discussion in other countries. Switzerland should do the same”, he said.

According to Joris d’Incà, sector leader of logistics at Oliver Wyman, the opening of the Ceneri Base Tunnel alone will not help improve performance on the north-south axis. Efficiency, punctuality and reduced transport times are also critical, he stated at the Annual Event. “In order to achieve shorter lead times and better punctuality across routes, it is necessary to manage the infrastructure along the north-south axis end-to-end from a single source and to develop a marketable product. The competitiveness of rail freight transport can only be achieved by infrastructure managers focusing more on the specific needs of the market, e.g. by fewer interruptions, short transitions and higher average speeds instead of an isolated optimisation of their own capacity utilisation and construction activity”.

Indeed, RFI, SBB Infrastructure and DB Netz have jointly prepared a first set of 24 daily paths for timetable 2019 with 25 per cent reduced transportation time between Cologne and Milano. “A promising first step”, Perrin commented. Moreover, DB Netz is preparing a scheme with malus payments for delay minutes that is asymmetrical in favour of railway undertakings and incentivises DB Netz to reduce disruptions.