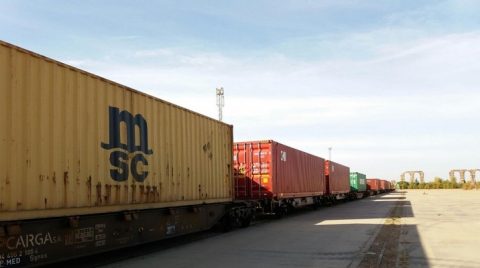 Portuguese freight operator Medway will start a new railway service linking Sevilla in Spain and Sines Port in Portugal on 4 April, taking another step forward towards connecting southern Spain with the Portuguese market.

Through the new service Medway will transport a hundred sea containers per day. The company noted: “This service will shorten transit times for those companies in southern Spain that want to export or import through Sines Port.” Medway has taken several steps to penetrate the south Spanish market. Recently, it launched a service between Cordoba (145 kilometer from Sevilla) and Sines Port, after it had already established a line between Madrid and Valencia, its first railway line in Spain.

What comes as an opportunity for companies in southern Spain is a hit for Cadiz Port on the Spanish south coast. With no direct rail freight connections with Sevilla, it relies on barge through the Guadalquivir River to transport goods to Sevilla and Valencia, a service offered by the Mediterranean Shipping Company. However, the new Sevilla-Sines line makes this service uncompetitive.

Moreover, Guadalquivir´s low flow impedes to sail large containerships. While Cadiz Port was once the most important Spanish port for South American import, it has been losing its importance in favour of the ports of Algeciras, Barcelona and Valencia, focused on sea-shipping services from or to Canary Islands and Sevilla.