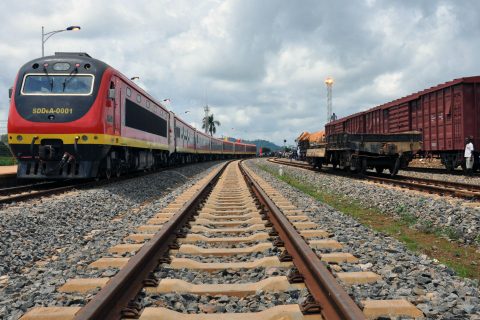 The national Angolan railway company Caminho de Ferro de Benguela (CFB) started a new railway service between Luau, close to the border with the Democratic Republic of Congo, to Lobito Port. It also has the ambition to revive the Cupper Ring, connecting Angola, Congo and Zambia. The Angolese government over the past years has been pursuing a recovery of the original railway infrastructure, that was largely destroyed during the Civil War.

The new Luau-Lobito service imports manganese from the mines of Congo. The first journey carried freight totalling 1,000 tonnes, loaded unto a 25-wagon rail freight train. The railway line has a 1,344 kilometer length and was reconstructed at a cost of 1.5 billion Euros.

CFB also wants to connect the Angolan rail network with that of neighbouring Zambia, reviving the former rail freight service which linked the copper and manganese mines in Zambia and Congo with Lobito Port (Angola). The Portuguese government completed this railway line, known as the Cupper Ring, in 1929 but services were stopped in 1984 due to the railway destruction.

On the long term, CFB wants to connect its national railway with the Mozambican coast, realising the old Portuguese project of connecting both territories, which used to be its biggest African colonies.

Angola has repaired all its old railway networks between 2004-2015, having invested around 4.3 billion Euros in 2,612 kilometres of rail tracks and 151 stations. In August last year, it resumed services between the southern Angolan towns of Techamutete and Jamba, after being interrupted for over forty years due to the Angolan Civil War.