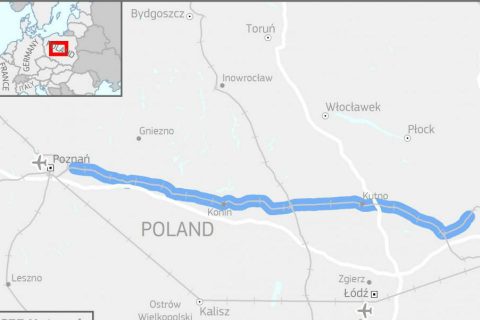 Investment on the Polish E20 line: improvement or waste of money?

Almost half a billion Euros costs the modernisation of the Poznan-Warsaw section of the TENT-T corridor connecting Berlin – Warsaw – Brest. Poland argues that the work is of great importance to the rail freight and passenger market. However, some consider the investment too large and only of relative significance.

Polish state-owned infrastructure manager PKP Polskie Linie Kolejowe has been working on the modernisation of the E20 line between Poznan and Warsaw since June this year. It is one of the most expensive railway investments in the country in recent years – the total cost is 0,49 billion Euros. The upgrade takes place at a 300-kilometer section. While several works are carried out simultaneously at a dozen locations, the most intensive work takes place between Konin and Września, on the western part of the line.

“This line is a very important part of the TEN-T North Sea – Baltic corridor. After the upgrade, the capacity of the track will be increased and freight traffic will become more efficient,” said Arnold Bresch, board member of PKP Polskie Linie Kolejowe. “The route will be adjusted to handle freight trains of 750 meter in length”, added Zbigniew Wolny from the company’s press team.

An important aspect of the upgrade is the automation of traffic control based on new Integrated Electronic Control Centres (for example in Konin and Kutno). Moreover, the infrastructure manager is planning to rebuild important, junction railway stations to improve their capacity and eliminate the need for radical speed reductions for trains passing the station without a stop.

Regardless of the potential benefits of the upgrade, the investment has aroused a lot of controversy. This can partly be explained by the disturbances of freight and passenger traffic. On a large segment of the line, traffic is halted completely. Meanwhile, some consider the effects of the modernisation to be relative. The technical condition of the infrastructure was already good and travel time will not be reduced significantly, are among the arguments heard.

The modernisation of the E20 line may be seen as a continuation of the works undertaken in the 1990s, when the permitted speed was increased to 160 kilometers per hour on a large part of the route. Digitalisation of traffic control did not play a role at the time. Rather, modern track building techniques resulted in an increased capacity on the line.