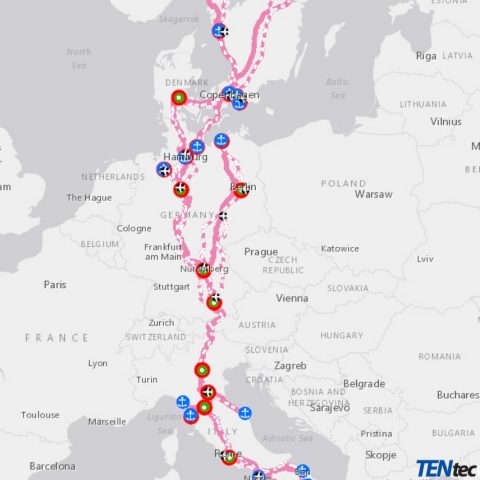 The Swedish infrastructure manager Trafikverket is preparing for the introduction of 750 meter freight trains on the Scandinavian part of the TEN-T corridor by increasing axle loads on the Malmbanan between Boden and Riksgränsen. The upgrade is part of its Draft National Transport Infrastructure Plan, a spending proposal for the upcoming twelve years. A budget of around 262 million Euros (2.5 billion Swedish Krona) has been reserved for the measures.

The upgrade of the network to allow longer trains benefits the heavy haul industry in particular, as iron ore trains operate between Kiruna and the Norwegian port of Narvik. It is also one of the objectives for the development of the TENT-T network as a whole, because it significantly increases capacity; a corridor allowing for the passage of 750-meter trains adds five per cent capacity per freight slot. Last year, 730-meter trains began operating on the Hallsberg/Katrineholm – Malmö corridor. The Scandinavian-Mediterranean Corridor represents a crucial north-south axis for the European economy.

The plan further includes an investment of around 29 billion Euros (280 billion Swedish Krona) in the railway industry, to the advantage of freight and passengers traffic. At least 47 per cent of the budget is allocated to maintenance projects, as the quality of the infrastructure has deteriorated over the years.

Maintenance work will include the renewal of signalling systems and a continued rollout of ERTMS, which will cover most of the network by 2030. A new telecommunications system will be introduced from the mid-2020s onwards to supersede GSM-R and the renewal of the optical fibre network will commence. A number of other new systems including the Market-Adapted Capacity Planning System (MPK) and the National Train Management System (NTL) will be rolled out with the aim of enhancing capacity and operational performance.

In total, 13 billion Euros (125 billion Swedish Krona) is needed for the operation, maintenance and renewal of the railway infrastructure, for which the infrastructure manager is seeking state contribution.