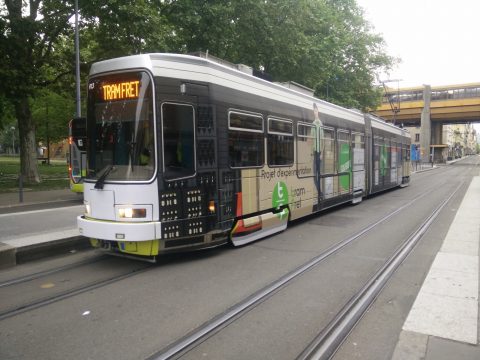 In several European cities the light rail network is being used for the transportation of various goods through the city. The latest experiments have been carried out in the city of Saint-Étienne over the past two months. For cities with an existing infrastructure, freight transport per tram is an appealing alternative transport mode.

In June and July, two outlets of the supermarket chain Casino received their merchandise per tram in a trial of the Tramfret project, an initiative led by research and development institute Efficacity. In six days of testing, nearly 15 tonnes of goods have been delivered to the stores.

The experiment is the result of years of research, carried out since 2010. With the project, Efficacity ambitions to promote a low carbon modal deferral tool, using existing infrastructures and an industrial chain by recycling rolling stock that was previously used as passenger transport, it said.

The project responds to strong challenges in a context marked for decades to come, such as the significant increase in the flow of goods in the city due to the explosion of e-commerce, but also environmental challenges, explains the research firm. The outcome of its recent trial deliveries allows the company to optimise the system, initiate its industrial development and study its sustainability, noted Joël Danard, Efficacity’s business development officer.

In Dresden, a similar project has been up and running since 2000, when the CargoTram was launched for the specific purpose of delivering car parts for Volkswagen. The tram shuttles between the logistics center of the company to its factory over an existing light rail network used for passenger trams. However, the trams have been constructed as the project commenced and designed for the delivery of Volkswagen cargo.

Enthusiasm for the alternative freight transport is especially evident in European cities where light rail infrastructure already exists. Over the years, the concept has been studied and tested in cities such as Zurich, Amsterdam and London. The advantages considered are mostly a relief of traffic on the road and environmental benefits. However, as an example in Amsterdam shows, financing can pose a challenge with no clear consensus among the parties involved.