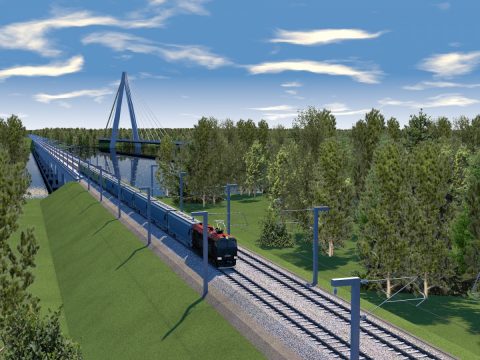 The Rail Baltica programme linking Poland with the Baltic states via a new dedicated line is to receive nearly half a billion Euros from the EU’s Connecting Europe Facility (CEF), almost a sixth of the total money on offer for European projects.

Catherine Trautmann, North Sea-Baltic TEN-T Corridor Coordinator, said the award, split over two projects, exceeded what would be the normal national allocations of the collective Baltic states, and represented a ‘remarkable success’ for Rail Baltica.

“This is a significant amount of money, considering the total pot available was 2.7 billion Euros, and this was divided out between 152 projects across Europe,” said Ms Trautmann. “Competition for funding under this third Connecting Europe Facility call was strong, and the number of projects proposed so far exceeded the available funding. In this context, I am very pleased that Rail Baltica secured so much funding from the CEF – just over one sixth of the funding available under this CEF call.”

This had also been, she said, the last call where the so-called ‘national envelopes’ reserved for member states applied. “It is remarkable that all three Baltic states, as well as Poland, not only managed to fully consume their allocation but will obtain funding under the cohesion call that goes beyond these envelopes,” added Ms Trautmann.

Rail Baltica is the most important project of the North Sea-Baltic Core Network Corridor of the Trans-European Network (TEN-T), and based on current progress is expected to be operational within ten years. Karima Delli, Chair of the European Parliament’s Transport and Tourism Committee, led a visit to the region by a group of MEPs last month, with the aim of boosting multimodal transport links with national authorities and rail freight stakeholders. A cost-benefit analysis of the project recently found that Rail Baltica has the potential to deliver vital socio-economic benefits such as increased exports, a lower carbon footprint and reduced travel times, benefiting both rail operators and freight forwarding companies.