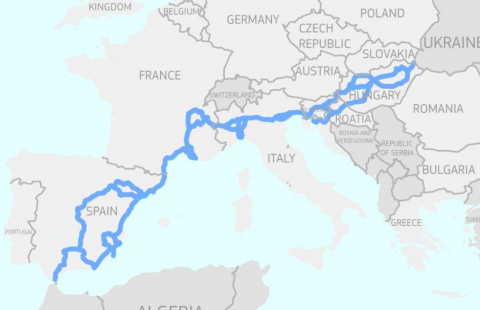 The government of Spain’s Catalonia region has called for work to be kick-started on developing the long-awaited Spanish section of the Mediterranean Corridor, part of a strategic European rail freight network. When completed, it will link with the Trans-European Network (TEN-T) network runs the length of Europe’s Mediterranean coast between Gibraltar and the Ukraine.

The Spanish section will include a 1,300km high-speed stretch that will connect the port of Algeciras in southwest Spain to Barcelona and the French border. Work on the section running between Tarragona and Murcia was to have begun in mid-2013 at a cost of around 1.4 billion Euros.

Mediterranean Railway Corridor stakeholders including trade unions, government departments, business bodies, and parliamentary groups recently met in Madrid to discuss progress on the line. Iñigo de la Serna, Spain’s Minister for Public Works is reported to have blamed delays on a ‘lack of administrative capacity’, according to the Catalan News Agency. He promised however to prioritise the project, echoing a pledge made a few weeks earlier by Spanish Prime Minister Mariano Rajoy, during a visit to Catalonia.

Josep Rull, the Catalan minister for territory and sustainability, called for a ‘clear and verifiable’ project timetable, adding that it was ‘time to go from just words to real facts’ and insisting that Madrid keep its promises.

The aim of the Mediterranean Railway Corridor is to facilitate the transport of both freight and passengers non-stop from Gibraltar to central Europe along the Mediterranean coastline, an investment which, despite being essential not only for the Spanish economy but for the entire European economy as well, has been repeatedly delayed .Carles Puidgdemont, President of Catalonia, has insisted the national government promote what is a long-awaited piece of infrastructure.

A report published by the European Court of Auditors in May last year said the European Union ‘had not been effective in enhancing rail freight transport’. It also emphasised that both the target for number of freight trains and overall tonnage of goods transported through the cross‑border section between Spain and France ‘are far from being achieved’.