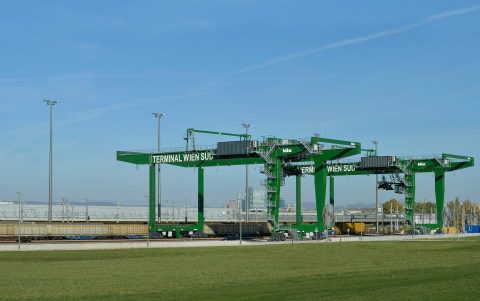 The central European location of the newly-opened Vienna South Freight Terminal will provide a pivotal link for international imports and exports. Built by OBB-Infrastruktur for the Austrian Transport Ministry, it has been labelled the ‘grand central’ for cargo traffic.

It lays the groundwork, they say, for fostering sustainability and a significant long-term modal shift of freight from road to rail in Europe and beyond. OBB sees it as a vital step, with rail’s share of the Austrian freight market already more than 30 per cent, supported by a national transport policy which aims to push this above 40 per cent.

Jörg Leichtfried, Austrian Transport Minister, said: “I want to move as much traffic off the roads and onto rail as possible. To do that, we need world-class rail infrastructure. The new freight terminal in Vienna will take up to 220,000 HGVS off the roads. Experts estimate that the Inzersdorf freight terminal will help shift around 60,000 HGV journeys to rail in 2017, a figure which is set to rise to around 220,000 once the terminal is fully up and running.”

OBB and the Austrian Transport Ministry have invested nearly 250 million Euros in the project, which covers 55 hectares, the equivalent of around 77 football fields. It connects directly to the rail line between Vienna and Pottendorf, and by road to the S1 motorway. It will be a vital hub for connections to and from the North Sea, Black Sea and the Adriatic.

All terminal processes were tested over a two-month period to ensure smooth, problem-free operations once the terminal officially opens for business. The Rail Cargo Group ran one train per day into the terminal, on which all the processes were rehearsed: handling different types of load unit, operational interaction between processes and systems, and loading and unloading.

Andreas Matthä, AG Chairman of ÖBB-Holding’s Board of Management, said: “Vienna South Freight Terminal is cargo’s new “grand central”. In future, it will be the locus of rail freight in Europe, not only consolidating Austria as a place to do business, but also creating a high-capacity terminal facility in the eastern part of the country.”

Jozef Vasak, Economic Advisor with the European Commission, added: “This project unblocks a bottleneck at the interface between three European Core Network Corridors and burnishes Austria’s credentials as a leader in enhancing its rail network.”